(1) To clarify the subtle but important difference between “tight credit” often talked about in the media and “tight guidelines” required to get a loan approved. Tight credit is when you can’t get a loan. Tight guidelines are when you can get a loan (even a $1m+ loan up to 80% of a home’s value) but it’ll require a couple extra pieces of paper and phone calls.

(2) To provide an (extreme but educational) example of the extra paperwork and calls: a loan funding all came down to verifying the source of a check the borrower received for 25 cents! But it was still funded within a 25 day escrow period, and with a record low rate.

‘Record low rates’ and ‘jumbo mortgage’ are two phrases you didn’t hear much in the same sentence until last Summer/Fall. Up to that point, the spread between a government backed (aka Fannie/Freddie) loan to $417,000 and a jumbo loan above that amount was as high as .875%.

JUMBO THAWING STATS
The reason: previously there was no real secondary market liquidity for jumbo lenders. So they had to keep these jumbo loans on their balance sheets. A few big bank players did this, charging a premium to the consumer for their risk, but most of the market was nonexistent, as these Bloomberg stats show:

– Securitizations (aka creation of mortgage backed securities or MBS) of newly issued mortgages without government backing (aka jumbo or non-agency) peaked at $1.2 trillion in each of 2005 and 2006.

– From 2008 to 2010 there were no securitizations on newly issued jumbo mortgages.

– Securitizations of newly issued jumbo mortgages totaled less than $1 billion for 2010 and 2011 combined.

– Securitizations of newly issued jumbo mortgages is already at $1.5 billion for 2013.

The jumbo market has heated up as tight lending guidelines have drastically reduced consumer late payments, strategic defaults, and foreclosures. This gives investors confidence to buy jumbos again, which means lower rates for consumer borrowers. These borrowers can count on lending guidelines remaining tight, but as noted above, all that means is a bit more paperwork when getting a loan.

JUMBO OUTLOOK
This hotter jumbo MBS issuance since last year is still a mere fraction (about .22%) of Fannie/Freddie/Ginnie MBS issuance, which is at $262.3 year-to-date and was $1.6 trillion in 2012. But jumbo 2013 MBS issuance predictions hover around $30 billion. For example that’s what Bank of America Merrill Lynch (BAML) said in a 2012 year-end report:

We look for non-agency MBS issuance to amount to $30 billion in 2013 as lenders look to manage the risk on new, non-agency mortgage origination and to diversify their funding sources.

In a newer report released last week, BAML provided some revised rationale for their projection. Most notable is the fact that Congress keeps raiding the guarantee fees (g-fees) Fannie and Freddie charge lenders in the securitization process for other purposes like funding payroll tax cuts. And despite the mortgage banking industry urging Congress to stop using Fannie/Freddie as a piggy bank, it looks like they’ll keep doing it.

For each 10 basis point hike in g-fees, we’ve seen consumer rates rise about .125% (explained in plain English here). So below BAML projects 25-50 more in g-fee hikes in 2013, and explains why this tips investors away from agency (or Fannie/Freddie) backed securtizations and more toward non-agency. 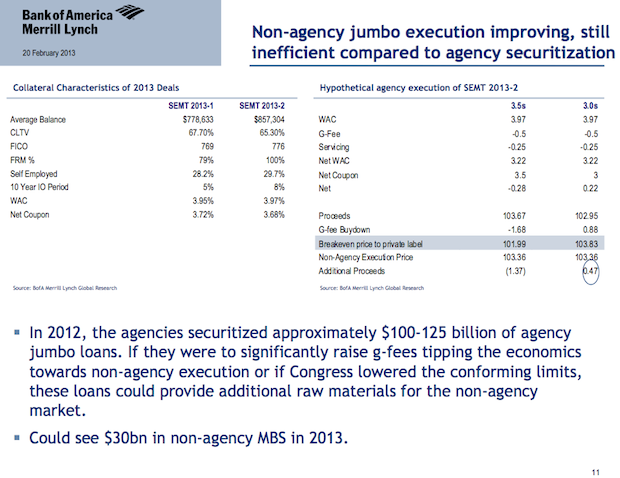 Given this trend and the fact that the year for non-agency MBS has started off so well, there are whispers out there that securitizations of newly issued jumbo mortgages could go as high as $100 billion. My firm alone is up 700% on jumbo production since December 2011.

Whatever the final number is for 2013, the rejuvenated jumbo MBS market is enough at it’s present pace to do two things:

(2) help signal to lawmakers pushing for less reliance on Fannie and Freddie that this objective is actually achievable.

The market is evolving rapidly, so follow me @thebasispoint to stay up to speed.
___
Related:
– Adventures In Jumbo Loan Approvals

– How To Get A Mortgage: For New AND Experienced Borrowers

– Why Non-Jumbo Rates Should Be Lower But Aren’t