Bonds sold initially, pushing rates up, after today’s 244k new April jobs figure beat 185k expectations for non-farm jobs. But bonds and rates have stabilized as traders study a different aspect of the jobs report: unemployment rose from 8.8% to 9% and the jobs component of the unemployment survey showed that 190k jobs were LOST from March to April.

How does unemployment rise when 244k non-farm jobs are created? And where does this 190k jobs lost figure come from? The confusion comes from the fact that the Bureau of Labor Statistics (BLS) reports two different job stat surveys in the same monthly release. Below is a primer on reading jobs reports, and why today’s ’244k new April jobs’ headline isn’t as rosy as it seems. 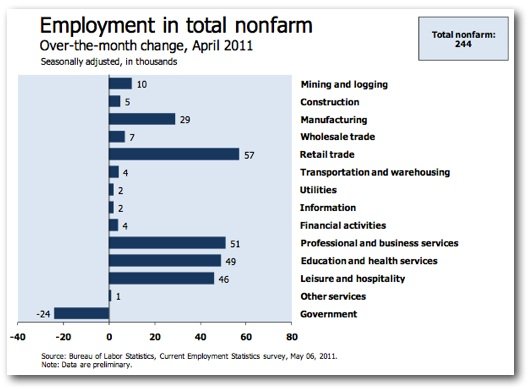 Two Monthly Jobs Reports In One
The BLS jobs report released the first Friday of each month shows jobs data from the previous month, and it contains two data sets. The non-farm payroll count comes from the “Establishment” survey, and is an estimate of wage and salary jobs, not an estimate of employed persons. The “Household” survey used to calculate the unemployment rate also has its own jobs figure which counts the number of employed persons.

How Jobs Are Counted
Press headlines are written off of the monthly jobs number from the BLS “Establishment Survey” which counts jobs using the Birth/Death ratio, measuring net gain or loss of openings (births) and closings (deaths) of businesses.

The BLS counts how many businesses opened and closed by monitoring creation and cancellation of employer tax ID numbers (like a social security number for a business). That data reveals what sector an employer is in, then the BLS calculates average number of employees for that sector, and does their job count by the net gain (birth) or loss (death) of businesses.

When a business is ramping up or winding down, hiring or firing decisions take many months, so this data is on a big lag.

Today’s April figures of +244k non-farm payrolls showed a net gain because, up until the past few weeks, the economy (excluding housing) had posted improving numbers so new business were ramping up and this count reflects that.

But going forward, we may see a correction to this number on rising jobless claims the last three weeks, new evidence of a housing double dip, and declining GDP.

How Unemployment Is Counted
The unemployment number comes from the “Household Survey,” which does telephone surveys of about 60,000 households, and it counts actual employed persons as opposed to the Establishment Survey which is a count of jobs.

For April, the Household Survey counted 13.7 million unemployed persons which represents a 9% unemployment rate. Also it showed that persons employed decreased by 190,000 from March to April.

Why Is Jobs Count More Influential Than Employed Persons Count?
According to the BLS, the Establishment Survey’s job count is used more (by markets and the press) than the Household Survey’s employed persons count because it is one of the earliest indicators of economic conditions each month.

It’s broader because it shows activities of whole businesses rather than just individuals.

Still, a look at the Household Survey of -190k employed persons for April does tie more accurately to the last three weeks of rising jobless claims. And this plus worsening economic stats linked above are signals to markets that the Establishment Survey (which, remember, is on a big lag) may slow down.

Rates drop when bonds rally on worse economic news, and mortgage bonds are now in their fifteenth straight session of gains due to the weaker growth data of recent weeks.

So don’t let headline data fool you, and stay tuned … next week will kick off with EU decisions on Greece’s fate, and end with business and consumer inflation reports.