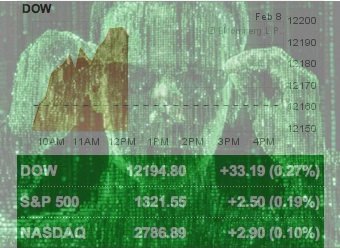 Eugene Linden of Minyanville makes good use of a Matrix analogy to describe how the Fed and big banks have created the illusion of a healthy stock market. Saw story via ZeroHedge, and in honor of this solid post, here is a Matrix stock market graph.

A well-trodden meme of TV and cinema has been the plot in which someone or something uses tantalizing illusions to sap humans of their will to resist while simultaneously pursuing hostile ends. In The Martian Chronicles, the subtle race of Martians distracted the invading Americans with irresistible life-like illusions that spoke to their most intimate yearnings. In one episode of the X-Files, a fungus slowly digested an unlucky couple who lay in a field and were rendered completely passive by the fungus’ hallucinogenic properties. And then, most famously, the machines of the movie The Matrix ruled over a ruined wasteland and seduced people with a beguiling virtual reality in order to maintain their passivity while they tapped humanity’s body heat as an energy source. Now, a lot of investors believe that life is imitating art in an alliance of the Federal Reserve and the big banks to create the illusion of healthy equity markets despite massive retail equity withdrawals in the years following the financial crisis.