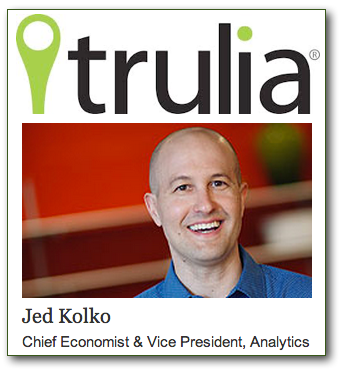 The S&P Case Shiller home price report for January 2013 was released last week, and the headlines were that national home prices increased 8.1% since January 2012. But there’s a lot of fine print in that number.

For example: the “national” home prices that the press reports are single family home property types only in just 20 metro regions. And what Case Shiller calls January is actually an average of November, December, and January. Remember it takes 1-2 months for real estate transactions to close, so the report saying home prices are up 8.1% today is about 5-6 months old.

The price differences in reports come from having different methodologies. I won’t address all of them all today, but instead want to focus on the Trulia Home Price Monitor because it does things differently than most of the reports above.

Instead of looking at prices of homes that have sold and closed, Trulia’s chief economist Jed Kolko looks at list prices, and he’s the first to do so each month.

List prices are a useful offsetting home price perspective to the bulk of the data that’s out there because they look at where housing is going rather than where it’s been.

With the release of it’s March Price and Rent Monitors Thursday, April 4, Trulia will celebrate it’s first anniversary of launching this monthly research.

To mark the occasion, I asked Kolko some questions about home prices methodologies, and here’s what he had to say (some items paraphrased by me):

Q: Why do you focus on list prices instead of closed prices?
A: I chose list prices because it’s critical information for consumers, investors and anyone making decisions NOW about whether to buy, rent, or sell real estate. Case Shiller, CoreLogic, FHFA, et al are the definitive historical record of what has happened with home prices but they report on a lag. The Trulia Price & Rent Monitors are a complement to the other home price data out there, and they’re essential for answering questions about where the market is today.

Q: But list prices change, plus closing and list prices differ. How do you account for that?
A: We’re comparing list prices with list prices over time. We’re not comparing listing prices with closing prices. Again: our emphasis is on looking at the housing market today, not what it was a few months ago. As for list prices changing during a given listing period, we’re only using the last observed list price reported. At the end of each month, we take all the for-sale and rental properties ever listed on Trulia.com and calculate how list prices and rents changed month by month. Rather than simply tracking the average or median, we adjust for the changing composition of homes that are listed each month. To ensure a large enough sample size, we use three-month moving averages just like the other majore home price reports do.

Q: What’s the most important thing consumers should know about Trulia price data?
A: We don’t just report median price, but also adjust for the mix of homes like bed/bath count and location/neighborhood. This is critically important because the mix of homes changes. Like if an expensive new development comes into a neighborhood, it can push prices up. To make the point, let’s use an exaggerated example of a new development that goes into a neighborhood and all the homes are $10m. If you took an average of all homes on the market, the $10m price points carry the average up. But that doesn’t mean the value of all homes in the city have gone up. It just means the listed homes pull up the average. So we adjust for these kinds of anomalies so people can do apples-to-apples comparisons and focus on price differences of like-for-like homes. Most consumers want to know what’s happening to the price of a typical home. They wouldn’t put more weight on more expensive homes, they just want to know the prices of the homes themselves. We help them do that.

Q: What is your preferred non-Trulia home price report and why?
A: I like FHFA because it reports on almost 400 metro areas so arguably one can learn more about local areas from FHFA than from reports like CoreLogic and Case Shiller. Also CoreLogic and Case Shiller both weight more expensive properties more heavily so they’re a better guide for high end whereas FHFA weights properties equally without value bias. CoreLogic and Case Shiller are geared toward investors. For an investor, a more expensive home counts for larger share of portfolio than a cheaper home. FHFA is a regulator with a policy focus so their focus is on what the change in value of a typical house is, not the change weighted in dollar value. So they’re implicitly measuring how has the value of a typical dollar invested in real estate changed. The indices are answering different questions, and FHFA is more consumer relevant. It’s also worth noting that they’ve expanded their index to include not just sales of homes with Fannie/Freddie loans in their quarterly (but not monthly) data, but also homes with jumbo loans and homes purchased for cash. You can read more about this in FHFA’s expanded data methodology.

Q: Do you think low inventory is driving prices higher?
A: In fact, my last Price & Rent Monitor released March 5 was focused on relationship of inventory and prices. To recap: we’ve been in a short-term “inventory spiral” where less inventory leads to higher prices, which leads to less inventory, and so on. But it can’t go on forever because eventually rising prices will encourage homeowners to sell and builders to build, which add to inventory and breaks the spiral [see cycle diagram below]. 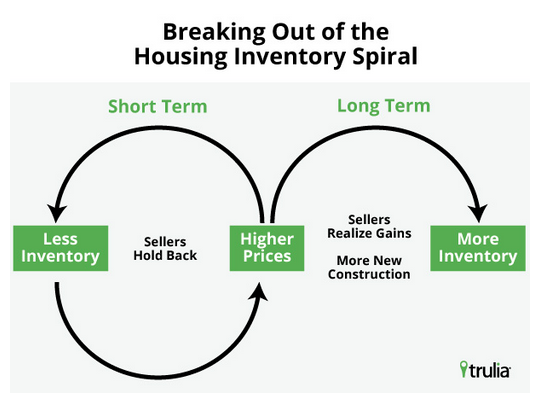 It could be at least another year until national inventory starts expanding. Of course, inventory will probably turn up this spring and summer because of the regular seasonal pattern, but the underlying trend will be less inventory than is typical for each season, not more. Inventory should turn around first in metros where prices bottomed first. Ultimately, the inventory turnaround will depend not only on how fast prices are rising, but also on whether prices will have been rising for long enough to encourage homeowners to sell and builders to build.

Q: When do Trulia’s Home Price & Rent Monitors come out?
A: They come out the first week of each month and look at the previous month. Of all major reports, this is the first gauge of home price direction consumers can get each month. Below is a schedule of release dates for 2013, and here’s our full methodology. 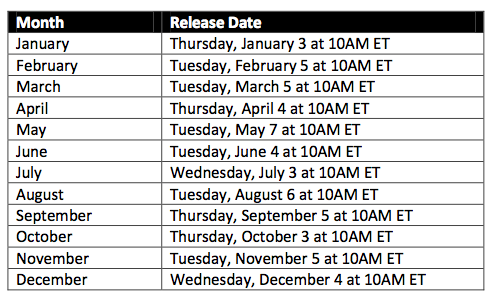 – How To Price A Home In Your Local Area