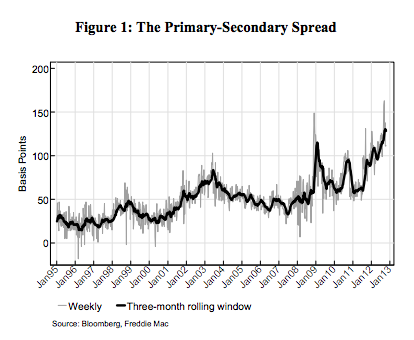 Rates ended last week even after being down .125% then rising again after Friday’s jobs report beat expectations. At 3.25% to 3.75%, conforming single family home loans up to $417,000 continue tracking at all-time record lows.

Next week’s key data starts with the last Fed rate policy announcement of 2012 Wednesday, followed by retail sales, and consumer and producer inflation reports. Because it’ll be a slower data week, rate markets will remain sensitive to U.S. budget talks in Washington.

I’m sticking with my rate outlook from last week:

…the rate outlook for the next two weeks is that rates could drop .125% and could rise by .25% to .375%. …my bet is still that lawmakers will at least get slightly closer to compromise as we move toward Christmas which will result in higher rates as MBS sell off—–and rates always rise faster than they fall when MBS are at record highs and rates are at record lows.

This outlook implies a rate locking bias. I track rate movement and lock/float bias each day in commentary I do with the MortgageNewsDaily MBS team (read here).

(2) to protect from any sudden MBS selloff and resulting rate spike that would come from any sign of fiscal compromise in Washington.

These are common reasons discussed at the retail originator level, and a recent New York Fed paper takes a much broader look at why rates aren’t lower.

The more technical reason rates aren’t lower is that the spread between consumer rates and MBS yields (aka rates of return for investors) is quite high by historical standards. As the chart below shows, this spread was 30-50 basis points (or .3% to .5%) from 1995 to 2008, and now it’s 120 basis points (or 1.2%).

In other words, if you apply historical standards to the current relationship between consumer rates and mortgage bonds, rates should be about .7% lower.

But they’re not because there are too many other regulatory factors at play that lenders must budget for. Dodd Frank mandated countless regulations that the Consumer Financial Protection Bureau (CFPB) still has to implement. Just to name a few rules lenders are anticipating and can only guess at for now:

So while the Fed has been incredibly generous to lenders by being a massive buyer of MBS which lowers rates, other areas of government are causing extreme risk averse behavior by lenders.

All this said, let’s look at one factor alone that might explain why rates aren’t lower. The guarantee fees (g-fees) Fannie and Freddie charge lenders in the securitization process are about 20 basis points higher than normal. The table below shows that g-fees have tracked at 20-25 basis points since 2002 but spiked to 42 basis points in Q3 2012. 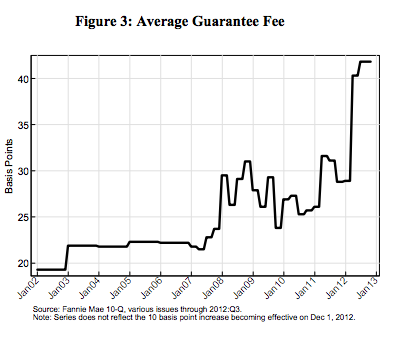 This implies about .375% higher for consumer rates. And remember we said rates should be .7% lower. So current g-fee issues alone could explain half of the spread, and that’s saying nothing of predictions g-fees could rise 30-50 more basis points in 2013.

Fed methodology was to explain the growing spread between consumer rates and bond rates by analyzing the following retail lender cost and profit areas:

– costs and risks of being forced to by back loans

– declines in the value of mortgage servicing

– consolidation of retail lenders and pricing power it might give them

– capacity constraints (as I noted above).

All of the regulatory risks I noted above are captured in these areas the Fed studied, but they weren’t so explicit about it. The Fed paper has a much more quantitative, measured tone.

Almost too measured: Fed reached no definitive conclusions as to why rates are higher than MBS markets would suggest. On Monday, NY Fed chief William Dudley admitted as much publicly when he kicked off a workshop on this topic:

I encourage everyone to take a look at this paper. It represents a good starting point for today’s discussion. However, as the authors are the first to acknowledge, the increase in the primary-secondary spread and the underlying changes in originator costs and profits remain something of a puzzle. I hope today’s discussion will further deepen our collective understanding of this important issue.

In conclusion: I’m far from being a Fed economist, but it’s pretty plain that retail lenders aren’t being greedy. They’re using the Fed’s MBS buying to float them through this regulatory overhaul era. Once the CFPB has completed a few major Dodd Frank rulemakings for retail lending, then we’ll see if the spread thins between mortgage rates and MBS yields. But even if the spread itself thins, the market rate level may rise as regulatory clarity leads to MBS selling on optimism about economic recovery.

For consumers, this is a long way of saying rates are very unlikely to drop. The Fed has done their job. And just as Bernanke likes to tell the lawmakers on Capitol Hill: the Fed can only do so much.
___
Reference:
– The Rising Primary/Secondary Mortgage Rate Gap (NY Fed, 11/28/2012)