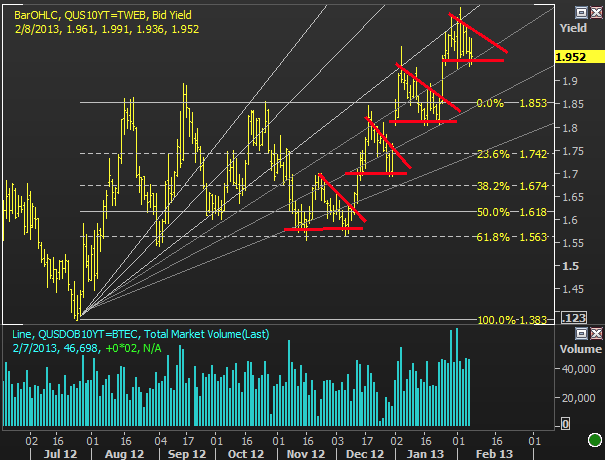 Remember that movie Sideways about a tortured soul who can only find solace at the bottom of a wine bottle? That’s what the past two weeks has been like in rate markets: volatile rate spikes followed by corrections. A rough road to nowhere that’s torturous indeed for rate shoppers … because they’re biased toward the dips after experiencing a long era of declining rates. So they hold. But then rakes spike again. So they hold longer for the big drop.

But that looks unlikely. This sideways range looks like it’ll continue sideways at best, with potential to go higher.

Fixed mortgage rates are tied to mortgage bonds, and mortgage bonds take signals from Treasury notes. Take a look at this upward trend in the 10yr Note yield (via @AQ_MND) as of Friday’s close at 1.95%. When bond prices drop in a selloff, rates (aka yields) rise. That’s what’s happening here with the 10yr Note.

Now take a look at the Fannie Mae 30yr 3% coupon (via @mortgagenewsmnd) that serves as a critical benchmark for lenders to price consumer mortgage rates. Each candlestick represents one trading day, and you can see the down trend (rates higher) since October, and the sideways but volatile trend of the past two weeks. I’ve also noted the January 15 date at which rates were still near 2013 lows. They’re now .375% higher than that mark (rates as of Friday’s close).

Keep in mind that this chart is price whereas the 10yr Note chart above is rate (aka yield), which means that when you see prices dropping in this Fannie Mae MBS chart, rates are rising. 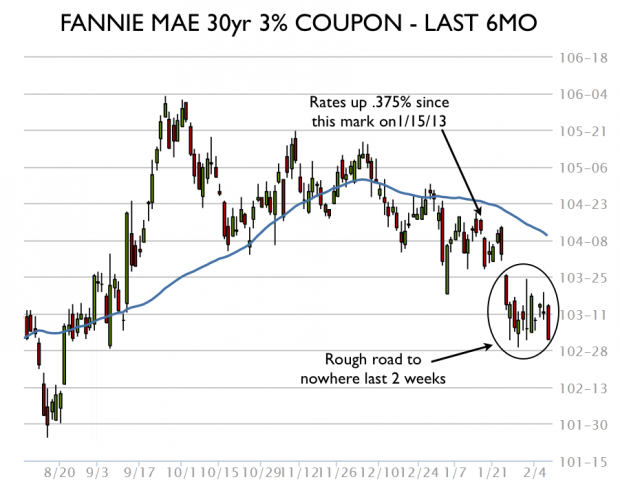 On the stock side, it’s the reverse where the S&P 500 has seen a sideways to higher trend in recent weeks. And as of Friday, the index broke higher as you can see by that last green candlestick in the 6 month S&P 500 chart below (via @bespokeinvest). 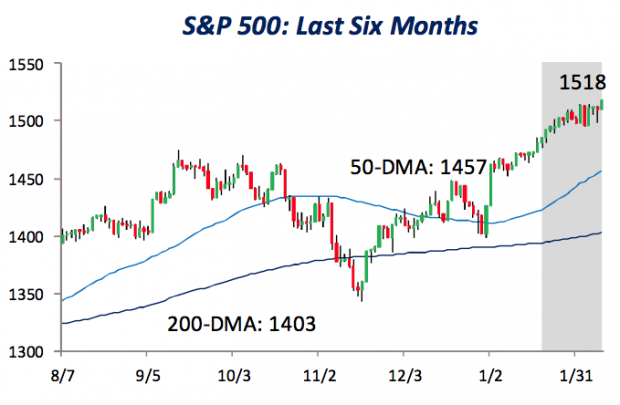 So will this sideways story have a happy ending? Depends how we define happy.

While U.S. stocks are on a tear, European stocks are weaker. If that weakness persists, U.S. stocks could feel it too, which could push money back into bonds and keep rates from rising sharply.

But a drop in rates is still elusive because it’s not just about stocks vs. bonds. It’s more about trading in the benchmark bonds that rates are tied to. The 10yr Note is still hovering right under the important 2% threshold and the Fannie 3% coupon is also at a technically precarious level of 103-01, leaving room to fall and rates to rise.

One macro consideration is the U.S. fiscal debate flaring up again because automatic spending cuts will kick in by March 1 unless Democrats can formulate and pass an alternative plan. The game theory here remains what it’s been with these bigger picture issues: rates could improve if spending cuts kick in because they threaten to slow economic growth.

But if a fiscal deal is cut, even a short term deal, rates would most likely continue on their sideways to higher trajectory.