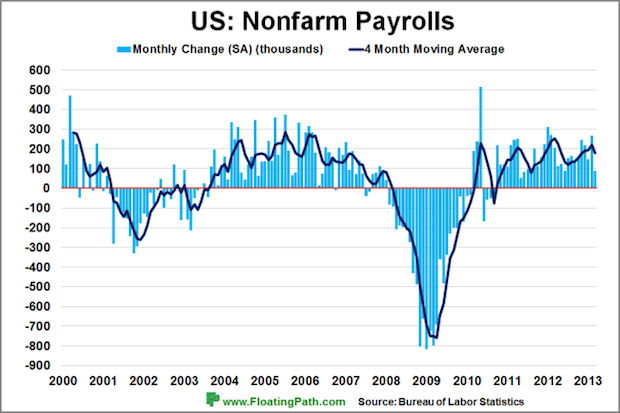 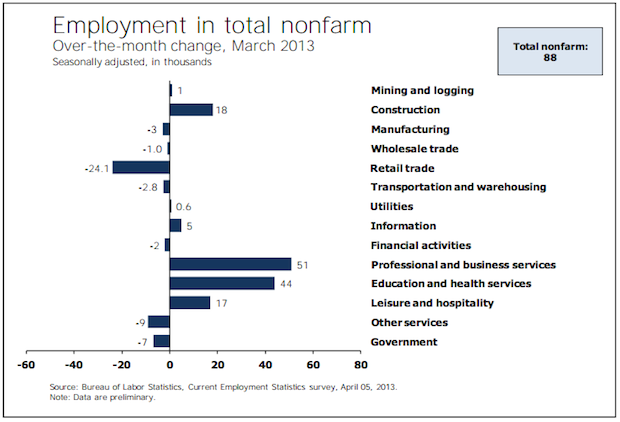 Rates are down today after a BLS report showed the U.S. economy added 88k nonfarm payrolls in March, way below expectations of 190k, and February was revised up from 236k to 268k.

The March number brings the average monthly gain over the last 6 months down to 169,000. The chart above shows industries with biggest positive and negative impacts on payroll growth.

Unemployment dropped from 7.7% to 7.6% according to a different component of the jobs report called the ‘Household Survey’ which counts people. There are 11.7 million people unemployed. Plus another 7.6 million people are working part time because their hours were cut or they can’t find a full time job.

The only good thing about this report is that it adds fuel to a massive bond rally this week, which has caused rates to drop to near record lows. 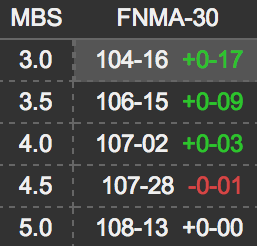 Rates drop when mortgage bond (MBS) prices rise on a buying rally, and this table* shows that rally today in key Fannie Mae MBS coupons that lenders use as benchmarks for consumer rate pricing.

2013 RATE RECAP
Rates started rising January 3 when markets interpreted December Fed meeting minutes as indicating that the Fed would end quantitative easing (aka QE, which is Treasury and mortgage bond buying to keep rates low) by the end of this year.

But then MBS selling resumed and rates were .375% above all-time record lows within a couple days, and they held that higher level until a few factors started reversing the trend: Fed chairman Bernanke reaffirmed a commitment to QE last month, geopolitical unrest spooked markets this week and fueled a bond rally, and U.S. economic data has been weaker in March and April, taking the 10yr Note yield down with it—see chart below, and note that MBS generally follow the direction of the 10yr Note. 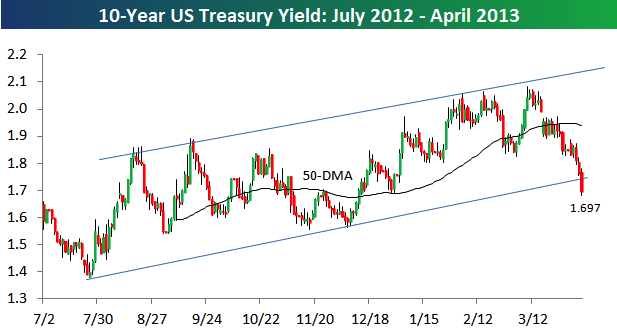 Again the takeaway here is: We’re now within .125% of record lows, so rate shoppers who slept last time we got this low now have another opportunity to capture the lows.

Including some other important rate and jobs report links below.
___
Reference:
– A Deep Dive On The March Jobs Report