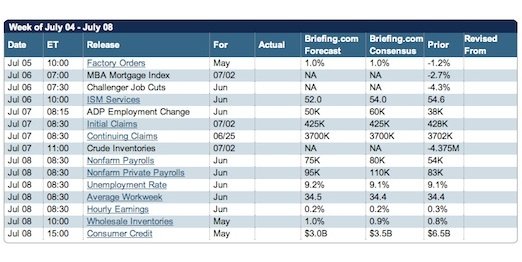 Rates were up .25% to end last week on perception of improving situations in Greece, U.S. housing, U.S. jobs, and U.S. manufacturing. This week is light on economic data (calendar below), and jobs reports will be the highlights.

Rates are slightly lower to begin this week as mortgage bonds rally to regain some of last week’s losses—rates drop when bond prices rise on a rally and vice versa. Below is last week’s recap and this week’s outlook.

Why Rates Rose June 27 to July 1
(1) Greece passed budget cuts and tax hikes needed to secure the next payment in its bailout package granted last May. Greece is prolonging the inevitable with their bailout, but short-term, markets see this austerity vote passage as positive.

(3) The National Association of Realtors reported that May Pending Home Sales gained 8.2% in May and are up 13.2% since May 2010. Pending home sales measures new contracts homebuyers have entered into, and there’s no guarantee they’ll close. But again, markets are keen on the simplest bits of good news.

(4) 2yr, 5yr, and 7yr Treasury auctions were all met with weak demand, which rattled mortgage bond markets as well.

(6) The Institute for Supply Management (ISM) reported Chicago area manufacturing index was 61.1 for June, higher than May and above expectations. Also the ISM June Manufacturing Index, which is a national reading, was 55.3 vs. 53.5 in May and also beat expectations. Readings above 50 signal expansion.

We also have the ISM non-manufacturing services index for June on Wednesday.

Lots of rate damage done last week with mortgage bonds (FNMA 4% coupon) dipping below the 200 day moving average (DMA) to end Friday. But this morning, bonds are up 31 basis points and touching the 200 day line again.

Bonds would have to break above this 200 DMA plus the 50 DMA which is another 29 basis points above current levels. Jobs would have to be worse than already-low expectations for this to happen.

On the downside, mortgage bonds have 82 basis points to drop to hit their next level of price support at the 100 DMA, which would push rates up about .25%.

For that to happen this week, jobless claims and jobs lost would have to rise, and ISM Services data would have to beat expectations.

Volatility of the past two weeks shows markets reacting strongly even when data is slightly above or below expectations.

We can expect that to continue, and borrowers should be ready to lock rates or have a strong stomach.