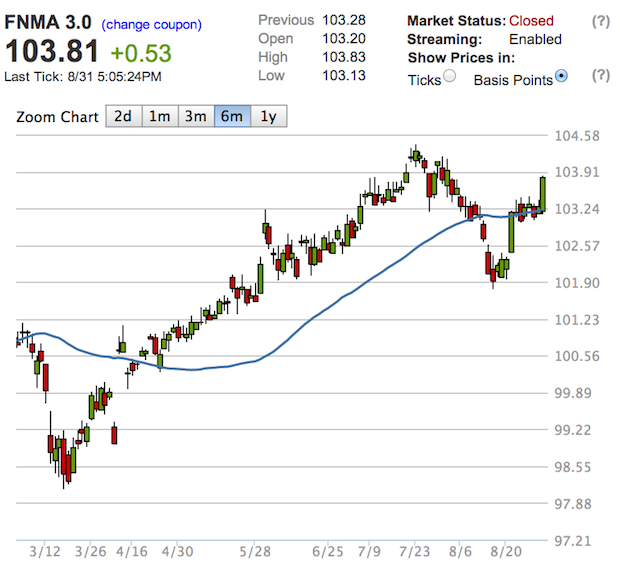 Rates ended last week down .125% and there were a couple days where they were even lower. Rates for 30yr single family home loans to $417k closed at 3.5%. Here are rates for all loan tiers as of Friday’s close.

In my last WeeklyBasis report, I discussed why rates rose from a July 24 low through August 17. I also said that period was a good wake up call for rate shoppers so they could be ready on the next dip.

That came this past week. I had a rate lock advisory all week and those paying attention captured true record lows.

This coming Tuesday, September 4 is another opportunity to do so because it’s the quietest day of next week. In the U.S., only August ISM Manufacturing is released so mortgage bond (MBS) markets may still hold onto gains that came Friday after U.S. Fed chief Ben Bernanke kept the quantitative easing (QE) door open.

QE is when the Fed prints money to buy mortgage and Treasury bonds, which pushes bond prices higher and yields (or rates) lower. But as we get deeper into QE—if the Fed did do it again it would be round three (aka QE3)—most bond price rises (and rate declines) happen on QE speculation, not actual QE.

Case in point: in the chart* below of a key mortgage bond coupon that lenders use to price rates, each candlestick represents one day, and you can see that Friday rose sharply to close at 103.81 after Bernanke’s speech. This is now a comfortable 60 basis points above the 50 day moving average (the blue line). This may provide some stability as next week heats up, but again, Tuesday is the best target locking day because many lenders didn’t improve pricing Friday to the extent that the day’s bond rally would suggest. They may do so Tuesday even if mortgage bonds were just flat.

Wednesday might also be somewhat quiet, but the economic calendar gets way more volatile Thursday with the Fed’s counterpart in Europe having their first policy meeting after an eerily quiet period for the eurozone debt crisis, and also payroll provider ADP’s August jobs report, followed by the official BLS August jobs report Friday.

So we’ll find out if Bernanke’s counterpart in Europe Mario Draghi will do “whatever it takes” to stem European debt contagion, or if he even can given Germany’s opposition to measures similar to those of the U.S.

As for U.S. jobs, estimates call for 120k-130k nonfarm payrolls added in August.

Rate reaction to Friday’s jobs report is difficult to predict because mediocre is the new good. In July, 163k nonfarm payrolls were added to the economy, and this was considered good (pushing rates up) only because the previous four months were so bad.

This is why I’m continuing my lock advisory from this past week into Tuesday only.

It’s also worth noting that home buyers (as opposed to refinancers) must be in contract to buy a home before they can lock rates because rate locks run with borrowers AND properties. So short-term rate market analysis is interesting for home buyers, but not as relevant until they’re in contract. It’s more important for home buyers to focus on local price analytics to make sure they’re getting the best deal on their purchase contracts. Then the rate lock decisions come.
___
Reference:
– $MBB, $TLT, $ZN_F, $TNX, $MACRO

*Chart used with permission from MortgageNewsDaily