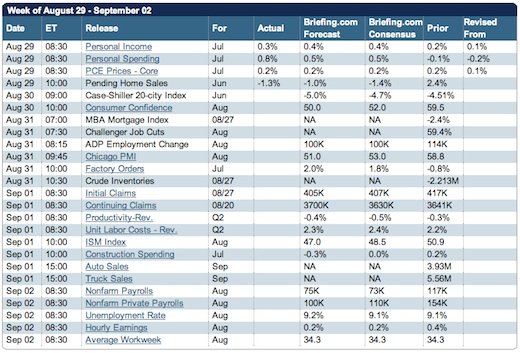 Week-over-week, rates are even. But they’re slightly higher this morning than Friday as stocks extend Friday’s gains. Below is this week’s economic snapshot, click image for details. So far today we’ve had consumer spending and inflation as well as pending home sales. Spending was rebounding early summer but has backed off in past two weeks, and pending home sales (homes for sale that went under contract) were down in July.

Highlights for the week include tomorrow’s Case Shiller June home prices, Thursday’s August ISM manufacturing index, and Friday’s August jobs report. May posted a second straight monthly home price gain after seven months of decline, so stocks and rates would likely rise if the winning streak continues. Manufacturing has weakened significantly in recent months measured by regional Fed surveys, so ISM will confirm if that trend continues—rates would hold lows on continued weakness. July showed 117k new payrolls created and estimates call for 75k on Friday. If it’s more than 75k, rates would rise as bonds sell on broader market optimism. Overall, it’s going to be another volatile week.