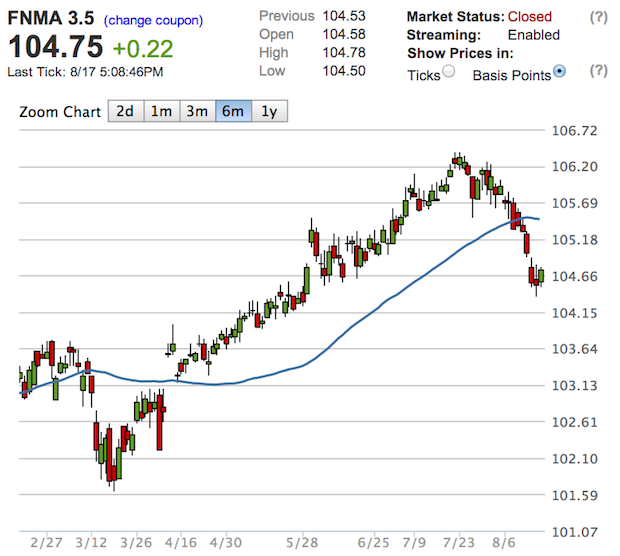 Rates ended last week up .125%, continuing their rise off record lows: 30yr single family home loans to $417k closed at 3.625%. Here are rates for all loan tiers as of Friday’s close.

Thanks to all of my email subscribers who’ve asked where WeeklyBasis has been. My last one, Low Rate Complacency, was June 24. Rates had been setting new record lows for a month up to that time, following May’s awful jobs report released June 1.

I’d spoken my peace—which is that rates were bottoming and it was time for borrowers, especially refinancers, to wake up—so there wasn’t much to say. There was only getting the work done for clients that recognized a good thing and took it as rates dipped even lower through July.

The chart* below tells the tale. It’s of the 3.5% Fannie Mae mortgage bond (MBS) coupon that’s a key benchmark for lender pricing of consumer rates.

Each candlestick in the chart is one trading day, and rates drop when bond prices rise. You can see that this process started on April 6, the day March’s awful jobs report was released. Then it continued for almost four months, driven by spotty U.S. data and panic about eurozone debt contagion.

Other high points on the chart were June 1 which I just noted above was a third consecutive jobs flop, and the top for MBS prices (bottom for rates) was July 24. On this day speculation about a third round of Fed bond buying to lower rates (aka Quantitative Easing or QE3) reached fever pitch after a WSJ story said QE3 could come as soon as August or September.

At that time, loans to $417k were touching on 3.375% with zero points for consumers who weren’t complacent. Those lows came within a couple trading days rather than stayed there for days at a time.

You can see that MBS prices dropped steadily since then, and rates rise when this happens.

It began with European Central Bank president Mario Draghi saying on July 26 he’d do whatever it takes to save the euro. This prompted my favorite headline of 2012, Market With The Draghi Tattoo, meaning stocks started rallying and bonds started selling, pushing rates up.

Friday’s close of 104.75 is a whopping 156 basis points below the July 24 high. Normally this could cause a rate spike of .375% or more. But lenders are holding on so far and we’re only about .25% higher than some of the lows we hit during that period.

In that scenario, we would see a rate spike sharper than we have in the past two weeks since this selloff gained steam.

SO WHAT SHOULD RATE SHOPPERS DO?
As discussed above, the technical damage of the past two weeks leaves MBS with room to fall, which would push rates higher still.

So what should rate shoppers do?

The easy answer: wake up and capture rate lows while they’re here.

The longer answer: most refinance candidates who were holding for lower up until this current rate spike have to ask themselves if they’re still willing to hold for some medium term correction.

On the one hand, you now see clearly what you’ve lost from waiting.

On the other hand, Europe’s problems are enough of a case to consider holding. As eurozone politicians end their summer vacations and get back to the business of fiscal gridlock—I mean if we’re a single nation facing our own Fiscal Cliff in December, how can 17 nations reconcile their agendas?

Here are market moving eurozone topics coming this week. Also this Tuesday 8/21 is the release of minutes from the Fed’s August 1 meeting. Rates rose that day and may rise more as markets are reminded that QE3 is likely off the table for now.

If you’re waiting, just be ready to lock at a moment’s notice on the next dip (and actually do it on the dip, perpetually waiting will likely be disappointing given technical signals).

Being ready means having ALL your documentation into your lender can pre-approve you and know that you’re eligible for whatever rate lock you take.

Lots of rate shoppers lose opportunities because they’re so busy rate shopping that they’re not allowing lenders to actually review their tax returns and bank statements to make sure they qualify first.

If you’re looking for a home purchase (instead of refi) loan, you can’t lock a loan until you’re in contract on a home. And given the short-term risks to rates right now, it’s best to lock rates as soon as you get into contract.
___

Thanks again to all of my WeeklyBasis subscribers for your support. Email me if you want on the WeeklyBasis list. And if you want daily housing and rate commentary, follow here:
Twitter | Facebook | Stocktwits | RSS | Email
___
Also See:

– EU Ponzi Austerity … and a solution to it

*Chart used with permission from MortgageNewsDaily