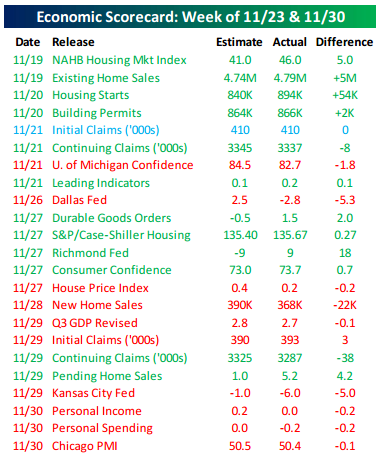 (2) to protect from any sudden MBS selloff and resulting rate spike that would come from any sign of fiscal compromise in Washington.

Meanwhile U.S. economic data for the past two weeks has been mixed. Here is a two-week recap by Bespoke Investment Group where reports in green beat expectations and reports in red were worse than expectations. As you can see, two weeks ago, data came in better and last week it started getting worse—this is one other macro contributor to rates dropping late last week.

All this said, the rate outlook for the next two weeks is that rates could drop .125% and could rise by .25% to .375%. Any drop is more likely next week as fiscal cliff debates are still too early on, and will create more uncertainty. Also if the jobs report misses already low expectations, it will help rates as well.

But my bet is still that lawmakers will at least get slightly closer to compromise as we move toward Christmas which will result in higher rates as MBS sell off—and rates always rise faster than they fall when MBS are at record highs and rates are at record lows.

So rate shoppers who have the stomach to float rates should do so with extreme caution. And they should read this primer on rates in the media so they know how to interpret headlines.

Also home buyers mapping out their schedules for December should take a look at this case for why the holidays are the best time to buy a home.