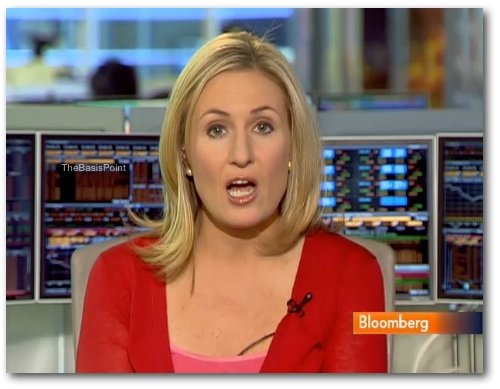 Rates dropped .125% last week continuing an unpredictable three-week down trend. The first catalyst was awful GDP data two Fridays ago, then last Friday began with a questionable jobs report and ended with S&P downgrading the U.S.

This picture I took best describes last week’s stunning volatility. Net result: mortgage bonds up, rates down. But not without wild swings that make advising clients an extreme sport. And it makes headlines of record rates deceiving. They’re here, then they’re gone. Below is last week’s recap, next week’s preview, and rate locking tips.

The week of August 1 showed manufacturing slowing, weakness in the jobs report fine print, Europe’s debt crisis spreading to France and Italy, and Washington’s long-awaited budget deal did nothing to support growth or address long-term issues.

So S&P downgraded the U.S. Friday, August 5 as an indictment of paralysis in Washington, and stocks best tell how that played out from August 8-12:

Mortgage bond markets swung similarly, and just like stocks were net down, bonds were net up. Bond yields (or rates) move inversely to price, and this is why rates ended down.

The week of August 8 brought mildly encouraging data: jobless claims below 400k (at 395k) first time April, retail sales up most in four months. But this was overshadowed by Europe’s debt crisis and a Fed policy announcement explicitly stating they’d keep overnight rates near zero “at least through mid-2013″ and remain open to more quantitative easing—bond buying to lower rates.

That’s why cautious bets on bonds won the week and kept rates low.

July producer and consumer inflation are Wednesday and Thursday. These figures are all within the 1-2% no-inflation-threat range, and there is no reason to expect surprises. Rates will most likely be neutral on this data.

We may see some unwinding of the post-Fed, post-downgrade bond rally that could push rates up slightly. But it will come down to these reports and developments in Europe.

Volatility & Rate Locks
As we enter further into uncharted economic territory, market volatility will continue and so will wild daily/weekly swings in mortgage rates.

When locking rates in this environment, remember that rate locking strategy isn’t like investing strategy. With investing, you stick with a plan and adjust slightly through short-term bumps. With rate locking, it’s a trading exercise.

You have to pick a high-end target that you can’t or won’t go above, and be ready to act whenever it’s there.

Since rates change throughout each trading day, make sure your mortgage advisor knows your target so they can lock your rate at a moment’s notice as markets dictate.

Keep your seatbelt on, and stay tuned:
Follow @thebasispoint