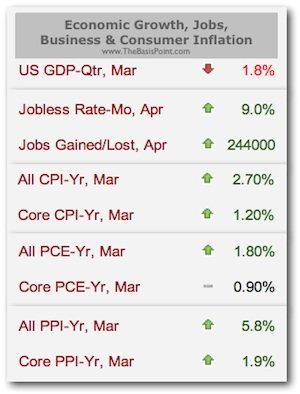 Below is a preview of next week’s reports on inflation, jobs, and consumer strength. And here’s a comparison of rates and economic factors today versus one year ago:

That last point will be a market theme early next week, and U.S. bonds and rates could benefit as investors seek alternatives to European debt.

Some upside rate risk will come from $72b in new Treasury securities being auctioned into markets as follows: $32b in 3yr Notes Tuesday, $24b in 10yr Notes Wednesday, and $16b in 30yr Bonds Thursday. New bond supply can rattle mortgage investors, causing them to sell which pushes rates up.

The accompanying graphic shows that Core inflation, measured by CPI for consumers and PPI for businesses, is under the Fed’s 2% comfort zone cap. Thursday and Friday will show us whether CPI and PPI will hold at non-inflationary levels. If they do, it’ll help stabilize rates.

Rates shouldn’t spike next week, but mortgage bonds have experienced a massive three-week rally, so profit taking as well as stable to better economic news may cause rates to rise slightly off extreme lows.