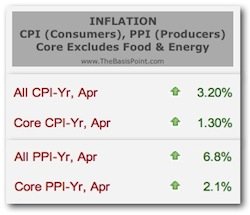 The good news is that rates begin the May 16 trading week near 2011 lows. The bad news is that it’s because of a frail economy. Rates drop when bond prices rise, and mortgage bonds have rallied the last four weeks on lower home prices, weak GDP, and low core inflation.

Bonds are topped out at the 200-day moving average so, while a further rally (that would bring lower rates) looks unlikely, a steep price drop (that would cause rates to spike) isn’t justified by economic data. Rates are fantastic, and below is a preview of the rate week ahead.

First, a word on last week’s “low” consumer and producer inflation shown in the accompanying table.

Yearly consumer and producer inflation figures appear tame … if you focus on the “Core” figures which exclude food and energy. This is what the Fed does because they say food and energy prices are too volatile short-term to dictate monetary policy.

If bond markets see inflation trends, they tend to sell, pushing rates higher. This happens because bonds pay investors fixed income each year. If inflation sets in, it erodes the buying power of that future bond income. This causes investors to sell, bond prices to drop, and yields (or rates) to rise.

So while rates are low as bonds rally on bad economic news, bond markets are more sensitive to all-inclusive inflation numbers than the Fed. Those figures are called “All” in the table, and you’ll see they’re much higher (than Core) for consumers and especially producers.

Next week, bond investors will get more producer inflation inputs Monday and Thursday from New York and Philadelphia regional manufacturing surveys. These surveys have shown higher inflation in recent months, and rates will rise slightly if the trend continues.

The jobs picture is slightly weaker which also helps bonds and rates. Thursday’s initial unemployment insurance claims figure will be the latest read.

After three weeks of rising jobless claims, last week’s claims (reported May 12 for the week ending May 7) decreased by 44k, and the four-week moving average of new claims rose 4,500 to 436,750.

Stay tuned, and hope you have a great week.