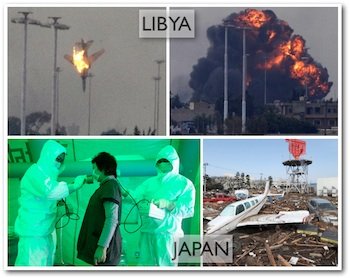 Despite big intraday fluctuations of +/-.25%, rates ended last week even for the third straight week. WeeklyBasis predicted rates would be up slightly on higher U.S. business inflation, perception that Europe’s debt crisis seems more contained, and less North Africa/Middle East turmoil than expected—all but the last point happened, which is why investors were net buyers of mortgage bonds, keeping rates low.

The UN declared a no-fly zone over Libya and authorized a coalition including the U.S., Britain, France, Italy, Canada, Belgium, and Qatar to help defend pro-democracy rebels against Muammar Gaddafi who has been battling their political uprising with lethal force. Fighting rages there which can keep rates low as investors stick to safe bond bets, but less Japan radiation fear plus AT&T’s $39b bid for T-Mobile may cause rates to rise as investors shake off uncertainty and sell bonds in search of higher yielding assets this week. Also markets will see the latest home sales data and start pondering post-QE2 strategies, both of which are previewed below.

The National Association of Realtors will release February existing home sales Monday. Even if there’s an up-trend after January’s annual gain of 5.3%, many market participants believe the NAR’s data is overstated by about 20%.

Tuesday’s markets will see if the new home sales down-trend will continue in February following January’s annual loss of 18.6%. Housing oversupply is an obvious issue, and taken with last week’s report that housing starts were down 22.5% in February—biggest monthly drop in 27 years—it tells markets that existing housing stock is enough and new supply could suffer.

Friday is the third of three 4Q2010 GDP reports, and is expected to come in at 2.9% which is in line with the 2.8% second reading. This shouldn’t move markets much unless there are consumer inflation signals in personal consumption expenditures.

And if Libya plus Japan fear factors start to subside over the next week, the June 30 end of Fed quantitative easing will take on a bigger role in markets, beginning with a monetary policy speech Friday by Philadelphia Fed president Charles Plosser.

As of June 30, the Fed will have bought about $2.5 trillion in mortgage and Treasury securities for 2.5 years.

Rates are certainly in a “no-fly” zone right now, but they could take off when the largest bond buyer since January 2009 stops buying. As we head into the last quarter of the 2.5-year QE campaign, this will be the most important market topic.