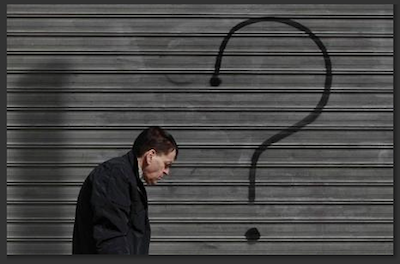 Rates dropped as U.S. mortgage bonds (MBS) remained a safe haven from global economic uncertainty, and stocks had their first losing week of 2012 as the S&P 500 was down 2.26 to 1342.64, breaking a five-week winning streak.

The Reuters picture above (see all) of a Greek citizen walking by a bank Saturday sums it up: uncertainty will continue as Greek debt negotiations dominate headlines and trading.

These austerity measures are required for Greece to secure 130b euro ($171b) more in EU/IMF bailout funds, part of which will cover 14.5b euro in bond payoffs Greece must pay by March 20.

If most private investors don’t agree, it could trigger credit default swaps (CDS) on these bonds. CDS are contracts investors can buy so that if an entity (like Greece) defaults on their bond payments, the buyer must be paid.

If this happened, it could cause liquidity issues for European banks that would have to pay on CDS contracts they sold. But dealers claim that even if CDS payments were required in a Greek default, it wouldn’t cause heavy bank losses.

Still, this situation creates indecision for markets because Greek Finance Minister Evangelos Venizelos said Greece must make a formal debt swap offer to private investors by Friday, February 17 so there’s time to finalize terms and secure bailout funds before the March 20 bond payoffs are due.

Another Europe factor this week: estimates for Europe’s 4Q GDP Wednesday call for -0.4%.

U.S. rates are likely to hold given Eurozone uncertainty, but a further rate drop feels less likely given optimism on U.S. data.

Here I preview each stat in detail for those who want trends.

Rates rise when bond prices fall, and these two averages continue to be strong support that have kept MBS from drifting lower. That’s why rates haven’t spiked.

As for whether MBS rise further and rates drop, it’s also a question mark based on Greek negotiations.

Given current extreme rate lows and the fact that lenders are overloaded with loans right now, lenders are likely to hold rates near current levels even if MBS rise modestly. They’d only lower rates if MBS spike on Greek default or something else.

If this doesn’t happen (plus U.S. data is better), we could see U.S. rates rise short-term as investors shift out of MBS and Treasury safe havens into riskier assets.