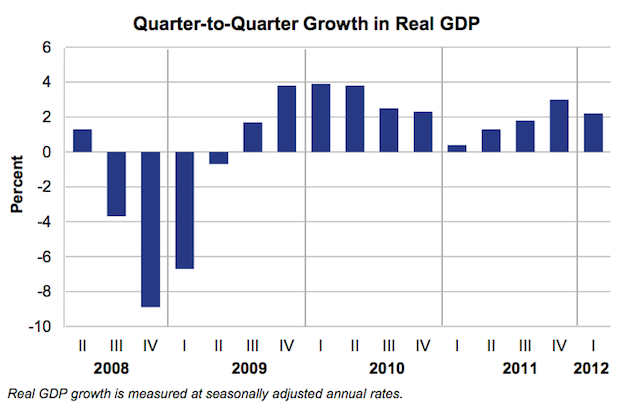 This is seasonally adjusted and inflation adjusted. This advance estimate uses 3 months of data for consumer spending but only 2 months of data and one month of estimates for the other components of GDP: investments, government spending, imports and exports.

In short, mainly the consumer drove GDP gain. The decrease in inventories on the supply side was a correction to a too aggressive buildup in 4Q2011.

The big picture is that having spent so much on “stimulus” and having taken in so much less in taxes (which left more for consumers to spend) this is a weak gain in GDP for being this far into recovery. There is no mystery. The collapse of the housing bubble resulted in significant losses to the banking sector followed by caution. It also left a large number of people with negative equity in their homes. That and the loss of jobs created by the liquidity crisis is making this recovery much more lengthy than a typical cyclical recovery.

We continue to increase national debt at a pace much faster than GDP growth and refuse to address entitlement spending. National Debt in the first quarter increased by $359,138,635,737.60 which was an increase of 2.30% for the quarter. The GDP increase is annual. On the surface, debt is increasing at more than four times the rate of increase in GDP. This is not a formula for success.
___
Further Reference:
– Full 1Q2012 GDP report

– This is the cost of labor: wages and benefits.

– This is in keeping with the internals of GDP. The consumer is increasing spending.