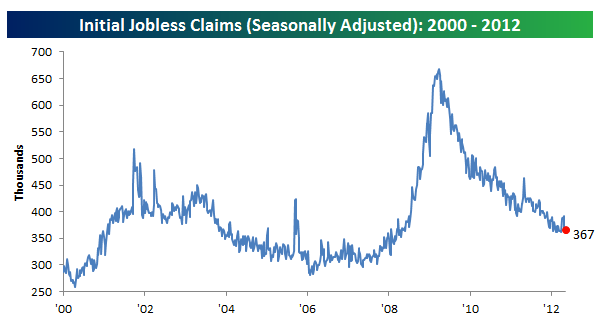 Rates are trying to hold record lows today as mortgage bonds (MBS) are trading even to down slightly on offsetting data: lower jobless claims pull bonds down and rates up; and strong demand for today’s 30yr bond auction pushes mortgage bonds up and rates down.

Still, the MBS bias today is toward the downside (higher rates) after a month long up-trend caused by questionable U.S. economic Fundamentals and especially Eurozone fiscal paralysis I discussed Monday.

Those macro themes should contain broad selloffs and keep rates in a very attractive range for consumers. But remember: a locked rate isn’t a closed loan.

Here’s a rundown of today’s data…

– This is the second straight week of lower than expected claims, following 5 weeks above expectations

– Bloomberg headlines this data as “U.S. Jobless Claims Decline, Allaying Concerns of Labor Setback.” Part of the problem is the unwillingness of media to accurately report data. The jobs market is not good, it is just not as bad as it was last month. The flat jobs market restrains GDP growth and has serious social costs.

– Full report from Department of Labor

– Here’s a chart from Bespoke