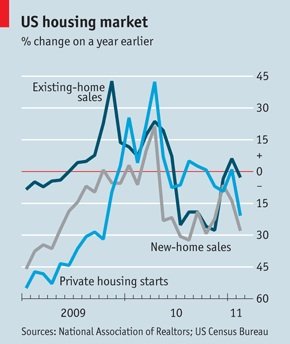 Yesterday’s S&P Case Shiller January 2011 report of existing home prices showed average U.S. home prices declined 3.1% from January 2010. Also January was the sixth straight month with a lower reading from the prior month, which reflects sustained foreclosure volumes and high unemployment. U.S. home prices are now at similar levels to what they were in Summer 2003. Two graphics telling this story are below.

S&P’s January report title didn’t mince words, saying “Home Prices Off To A Dismal Start In 2011.” More recent housing market data corroborates this view. S&P’s home price report is on a two month lag, but we’ve already seen February data on housing starts (down 22.5%), existing home sales (down 9.6%), and new home sales (down 16.9%). All three reports suggest that February’s home price report next month will continue the down trend. Note that these are all national stats, and property prices and sales are highly localized, so consumers must analyze and understand their local markets before making decisions. 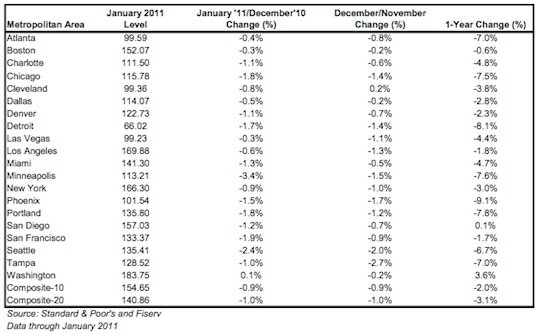 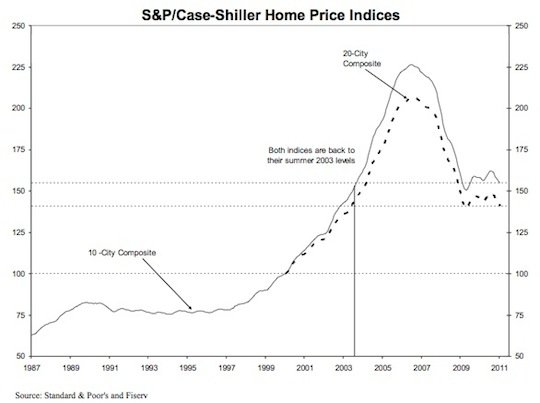 NOTE: The S&P Case Shiller index tracks existing single family homes, and is a credible pricing barometer for broad market analysis because it excludes condos and new construction. Condos can have more volatile pricing, and new construction pricing can be artificially set by builders, especially in times of distress when discounts an incentives can skew pricing. S&P refers to 10 and 20 “City” Composites, but these are actually metropolitan regional areas, not just cities. For example, where the city says San Francisco, this isn’t just San Francisco, but rather 5 counties in the Bay Area region (see page 9 of this PDF): Alameda, Contra Costa, Marin, San Francisco, San Mateo.