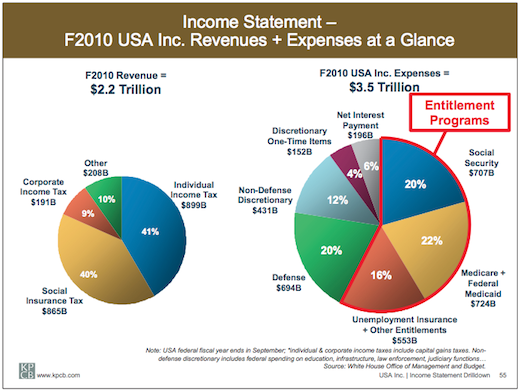 Remember being glued to your computer or TV in Fall 2008 trying to figure out what was next in the market meltdown? The debt ceiling circus in DC and S&P’s subsequent U.S. downgrade have captured consumers’ attention in a similar way. But this topic is much more complicated and consumers mostly get information in two forms: too hysterical or too technical.

Not to worry, I’ve got a solution for you. But first, let me reiterate something from my rate outlook for Monday:

I think fear will continue to overpower greed next week (rates down), and I also think the downgrade could adversely impact bond market sentiment (rates up). So rates will continue to be volatile, but I don’t see a massive bond selloff and rate spike on downgrade news.

That said, nobody truly knows because we’re in uncharted territory. It’ll be another wild week and we’ll have to take it day to day, starting Monday morning. You can follow on Twitter and Facebook.

And now for the U.S. financials in consumer-friendly format.

Below is a summary of U.S. income and expenses from Mary Meeker at Kleiner Perkins. Some might remember her as a superstar tech analyst at Morgan Stanley. Since joining Kleiner, she’s spent a lot of time analyzing and simplifying the U.S. budget. This slide is pulled from her piece de resistance: a 266 page report called USA Inc. released in February.

Since then, she’s done great work putting this research in terms anyone can understand. Lots of family budget analogies, and lots of “basic math” that cuts through this weekend’s war of words between S&P and Treasury.

So this week, instead of watching your favorite TV bloviator pour the U.S. budget through their chosen filter, take the time to watch Meeker break down the real math and the real issues. Video and link to her USA Inc. site below. The site includes this video in annotated slide format.