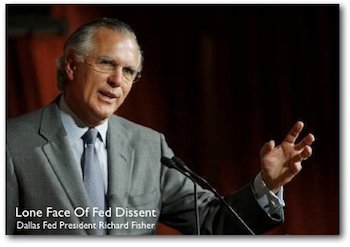 Dallas Fed president was out in force last week with anti-inflation warnings, first during an interview with Reuters, then during a speech in Brussels. Yet throughout the crisis recovery period, he’s used his position on the FOMC to vote for near-zero overnight rates and to press forward with two rounds (and more than $2 trillion worth) of quantitative easing that will end June 30. He’s known as an inflation hawk yet his FOMC voting record doesn’t support it.

Kansas City Fed president Thomas Hoenig rotated off the FOMC in January, but voted against such stimulative policies at every Fed meeting of 2010. This year, he’s still given speeches and told the press how rates are too low, but now he’s retiring effective October 1. So now we’ll see if Richard Fisher steps up to take the role of dissenter at the next two Fed meetings on April 26-27 and June 21-22. These are critical Fed meetings because, with the QE2 June 30 end date looming, they must use these next two meetings to tell markets where they intend to go from here.