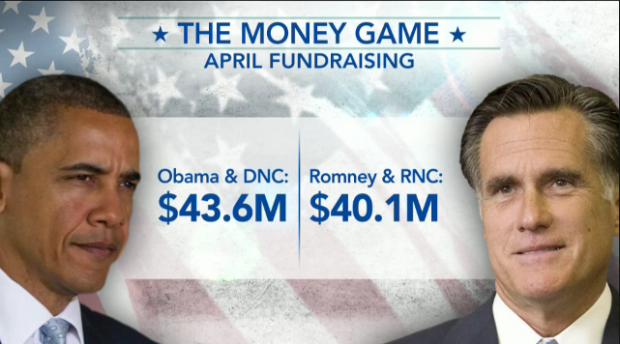 I used to hate it when talking heads blame one side or the other for “being so political” during elections or just normal governing (if you can call it that) like the debt ceiling debate. “It’s politics you moron” was my common response to my TV screen. But I’ve finally realized it’s just a tactic to get people mad enough to pay attention and/or donate to campaigns. It works too. Here’s what Bloomberg reported on Obama and Romney campaign fundraising efforts during April.

Not that I’ll ever get to express my fake outrage at “how politicized these political ads have become” because politicians don’t spend ad money in San Francisco. They need to save budgets for more polarized regions.

And while I’m on the topic, I think campaigns should direct more money toward the web anyway. There are some clever things going on with web campaigning, and I’ll be commenting more on this as the election drags on and on. And on.

Until then, here’s more on campaign fundraising plus a preview of debt ceiling and other fiscal cliff drama coming (once again) to a screen near you this summer…

Debt Ceiling In Play Again: What You Need To Know (CNN)