The Economist has a good article (about the US real estate market not being in a bubble) and created a terrific interactive graph that allows you, by metro area (you have to click on San Francisco to add it to the graph), to compare home price changes in real terms over time, versus average incomes, and versus rents, from 1987 to 2013. San Francisco is at the top of the chart in percentage increase and increases in prices in real terms, but still rates right at the long-term average in home prices versus income and versus rents. The Economist was one of the very first to identify the housing bubble inflating – running strongly against the then current opinion of other pundits – so I think their opinion on whether another bubble is about to burst in the U.S. is worth hearing. (FYI: The do believe there are serious housing bubbles in certain other countries.)

”The verdict: in most markets houses are near or above their long-run values, but none looks bubbly. Price rises in Phoenix, Tampa and Miami have restored values only to their long-run averages. In Las Vegas they are still below that long-run average. Many things could trip up the housing recovery, from stalling job growth to higher mortgage rates; at the moment, a bursting bubble is not one of them.”

You can play around with the interactive chart, and you should read the article below the chart widget:

Here are 3 of their charts with San Francisco added: 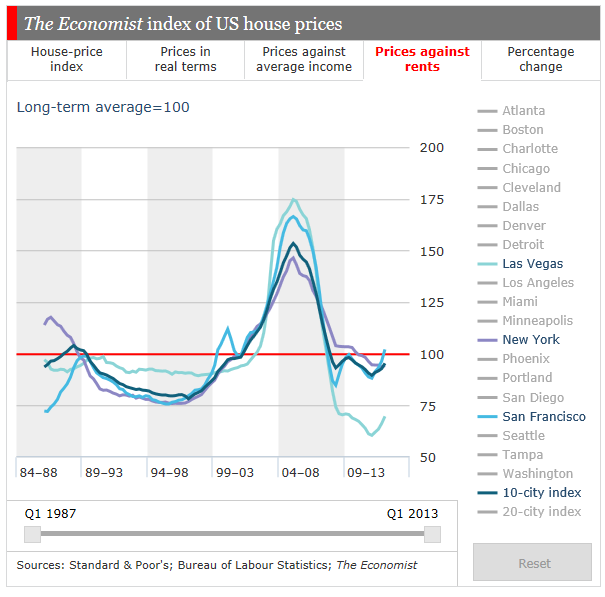