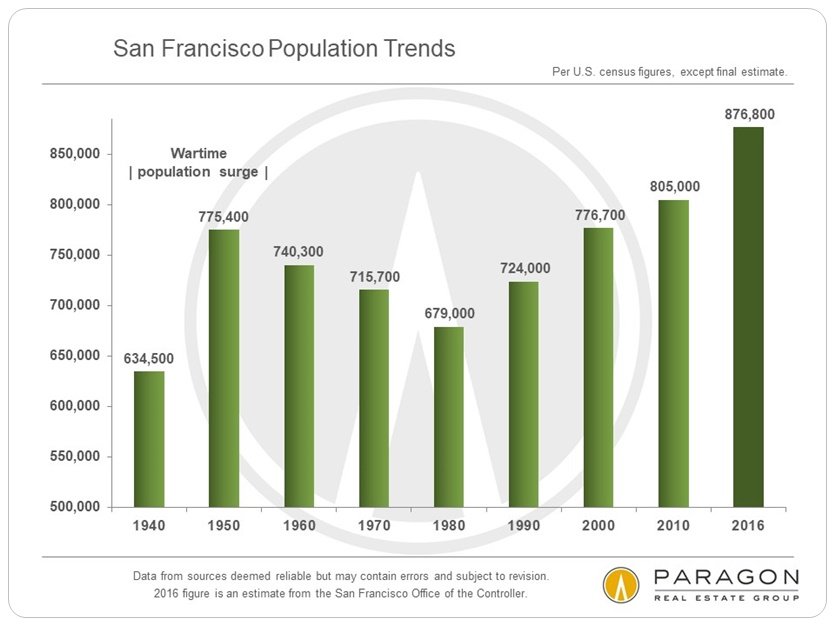 The real estate markets in the SF Bay Area are parts in an overall economic reality that includes a number of financial, demographic and psychological components – all of which are impacting each other in constantly changing ways. Some are local, and others reflect national or even international events or trends. They often run in parallel, but can also diverge or reverse themselves very suddenly. Below are snapshot analyses of what we see as major cogs in this economic machine.

In some charts, we use specific data for San Francisco itself, but the trends seen there – such as home price appreciation, employment and housing affordability – are playing out, to varying degrees, throughout the Bay Area. That is, we believe these economic context illustrations generally pertain to the entire region.

The charts are relatively self-explanatory if you wish to skip the descriptive text.

The Bay Area has had the strongest employment trends in the nation, adding approximately 600,000 new jobs in the past 7 years. As illustrated below, San Francisco alone has added about 100,000 in that time period. All these new people need somewhere to live, and many of these new jobs are very well-paid. Note that after dropping in early 2016 (per the economic cooling to be discussed later in this report) and then climbing back up again in the second half of 2016, hiring has basically plateaued in 2017. (Too much should not be made of short-term data.) 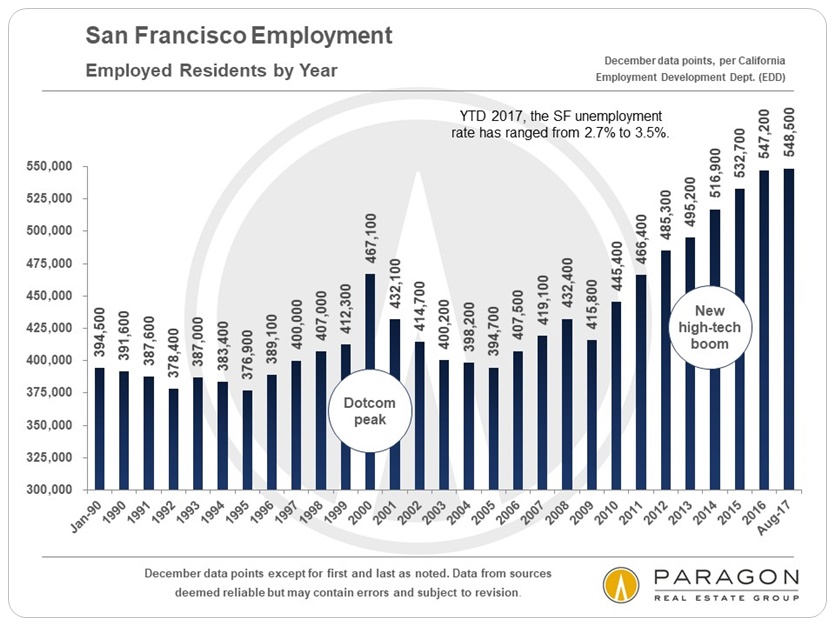 Though ramping up in recent years, new housing construction has not come close to meeting the needs of a rapidly increasing population. Most of the recent new construction would not be considered “affordable,” as developers have concentrated on more expensive condo and apartment construction. So while helping to fill an urgent need for new housing, it has not really helped less affluent, normal-working-class segments of the population. 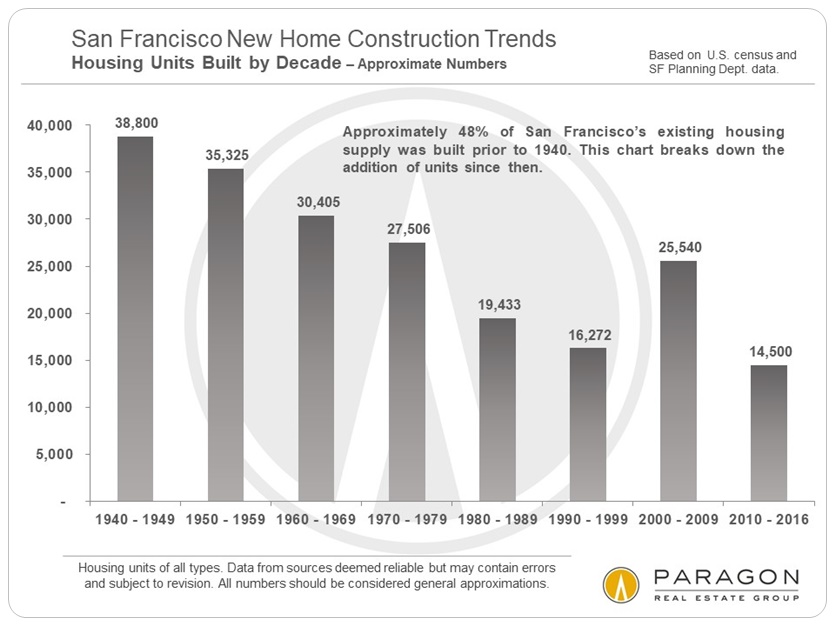 A snapshot of what is currently in the pipeline for new construction in the city. 3 huge, long-term projects make up a big percentage of units planned. Note that the pipeline is constantly changing: new plans submitted, and existing plans changed or even abandoned. Just because something is in the pipeline does not mean it will end up being built. Economic downturns typically shut down new development plans very quickly. 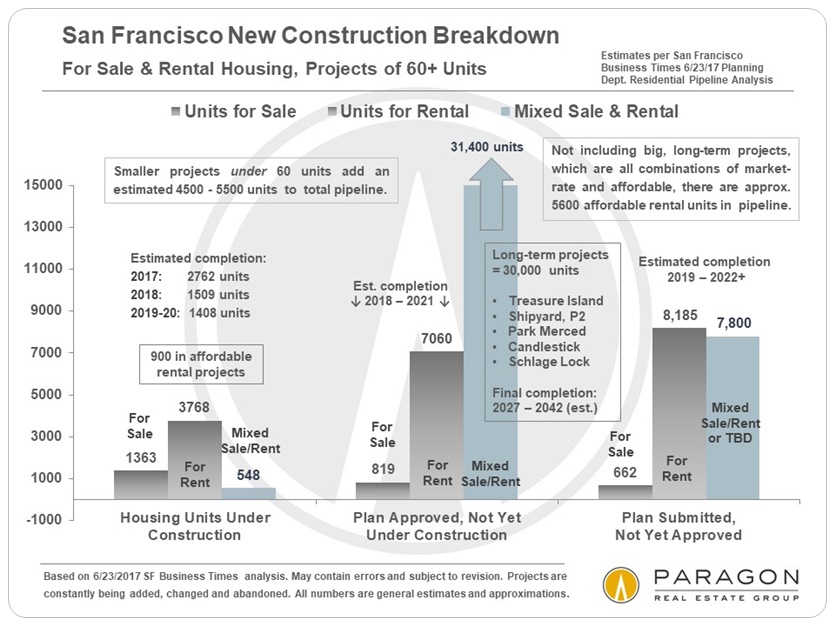 The 35% to 45% decline in interest rates since 2007 has played an enormous role in real estate markets, in effect subsidizing much of the home price increases seen in the past 6-7 years. Since the 2016 election, rates first jumped up 23% and then declined again to, historically, very competitive rates below 4%. The fear that rates might rise again soon may have been one factor behind the feverish spring 2017 markets seen around the Bay Area. It is notoriously difficult to predict interest rate movements with any confidence. 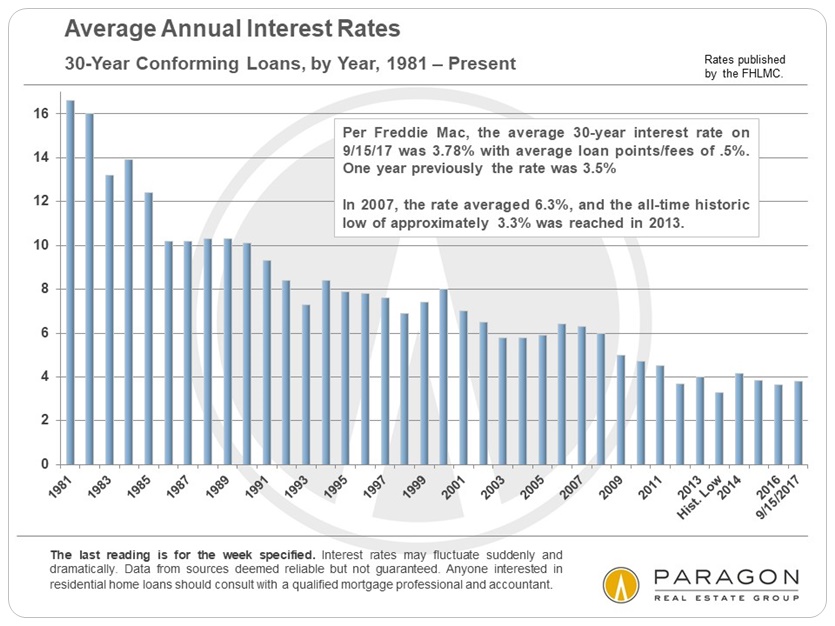 The monthly fluctuations in consumer confidence reported on in the media are relatively meaningless and without context, but longer-term movements are much more meaningful to overall economic trends. Psychology – confidence, optimism, fear, pessimism – often plays a huge role in financial and real estate markets. And events can sometimes turn consumer confidence one way or another very rapidly, whether such movements are rational or not. 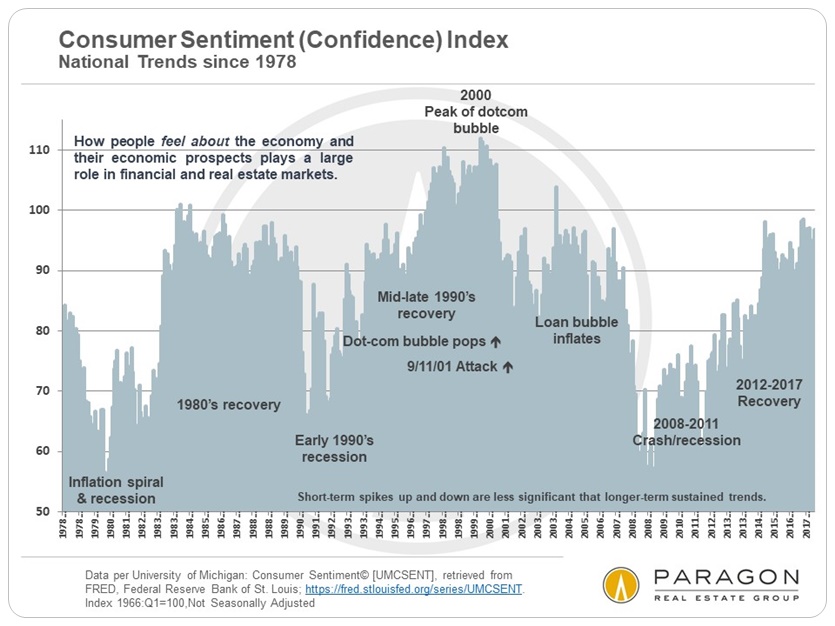 Besides the effect of increased, well-paid employment, the sudden creation of brand new wealth has been a very, very big factor in Bay Area real estate markets. IPOs can create tens of thousands of residents who suddenly feel much, much wealthier, and that impacts home buying. Local IPO activity increased through mid-2015, pouring hundreds of billions of new dollars into the economy, and then suddenly stopped in its tracks when financial markets suddenly became very volatile in September 2015. This particularly affected the high-end homes segment: Not only were new millionaires not being minted by the dozen, but the affluent are typically most sensitive to financial news and market volatility.

The Bay Area has an astounding pipeline of possible IPOs in the not too distant future – Uber, Airbnb, Palantir and Pinterest, to name a few of the biggest. If and when these companies go public, and how the IPOs are received, are a real wildcard for the region’s real estate markets. There is the potential to unlock tremendous wealth held in relatively non-liquid private equity into billions of spendable dollars. On the other hand, if there was a dotcom-like implosion, the effects would be quite serious. (We don’t expect such an implosion, though a sudden financial crisis could still have significant negative ramifications, especially for currently unprofitable start-ups.) 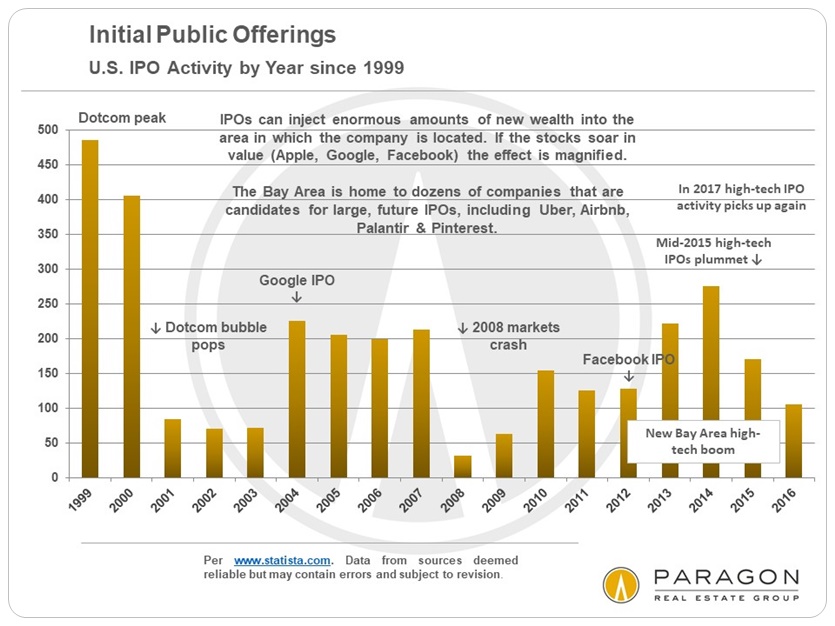 The gigantic surge in the stock market over the past 9 years has also made people feel much wealthier, which, besides making new money available to purchase a home or a bigger home, stimulates consumer (and venture capitalist) confidence, which feeds yet more positive energy into the markets. 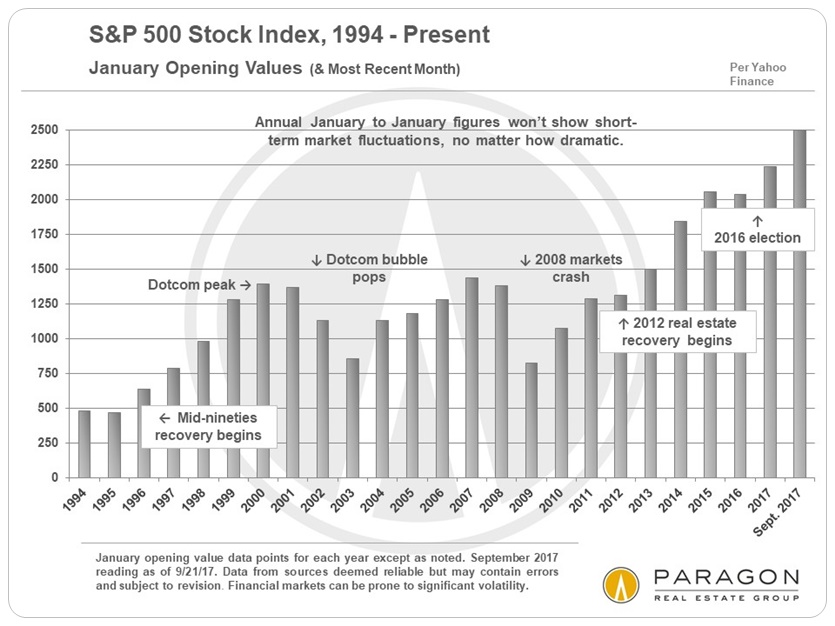 The above S&P chart smoothed out all the volatility to illustrate the overall steady climb in stock market values since 2009. Below is a snapshot of the volatility that occurred from autumn 2015 to late summer 2016 (with an allusion to the big jump that has occurred in 2017 YTD): stock markets plunged in September 2015 to recover fully by November, then plunged again in January 2016 to recover again by April. Then came a smaller response to the Brexit vote. This volatility affected IPOs, venture capitalist confidence (to continue funding start-ups), hiring, and real estate markets, especially of more expensive homes. One local, respected economist predicted in late 2015 that soon “there would be blood in the streets of San Francisco” from a collapse in high-tech and housing booms. Then financial and real estate markets, hiring, VC and consumer confidence bounced back dramatically in 2017, and he revised his estimate for streets filled with blood to 2019 or 2020. 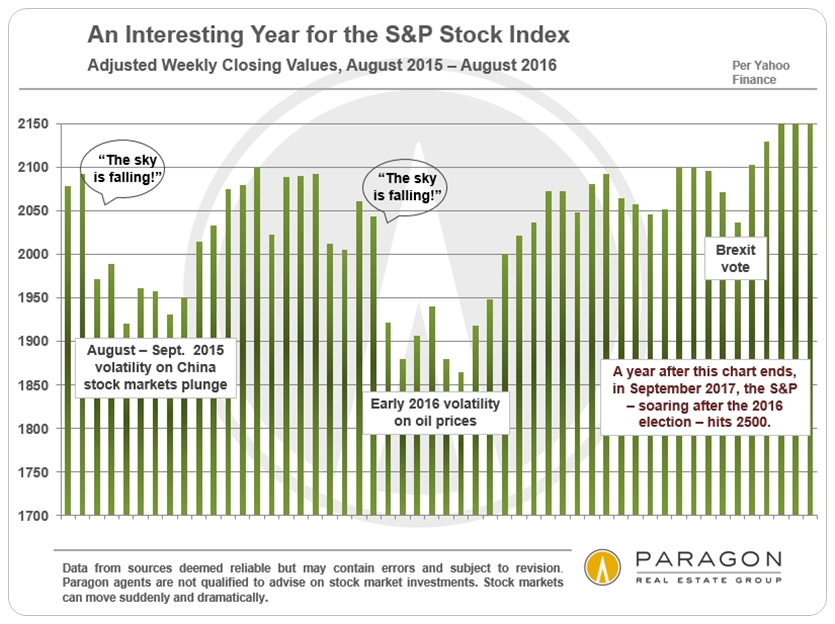 Again, this chart is for San Francisco, but similar trends occurred throughout the Bay Area. Soaring population and employment without a concomitant increase in housing supply made rents soar to the highest in the nation. Extremely high rents (with no tax, equity accrual or appreciation benefits) make many people think of buying as a better financial alternative. Rents declined from a peak in 2015 due to increased supply (new apartment buildings coming on market) and a softening in high-tech hiring through mid-2016. In 2017, there are some preliminary signs of a recovery, or at least that the decline in rent rates has, for the time being, stopped. 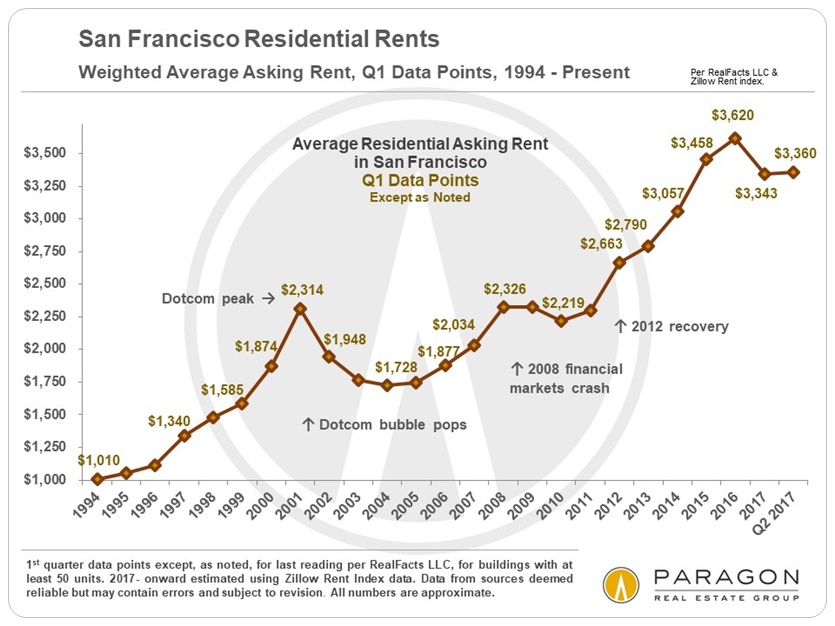 A very significant change has occurred in real estate markets locally and nationally: Homeowners are selling their homes much less frequently. There has been a general decrease in population mobility (people moving for new jobs), a substantial increase in the average age of homeowners (older people move less often than younger), and an increase in owners renting out homes instead of selling (helped by the big drop in interest rates and the big jump in rents). If demand increases for all the reasons mentioned earlier – demographic shifts, new wealth, new jobs, more confidence – but the number of homes being put on the market declines, that creates the pressure that leads to higher home prices.

MSI is a statistic that takes into account both buyer demand and the supply of homes available to purchase. The lower the MSI, the greater the competitive pressure on prices: Very low MSI figures, such as we have been seeing around the Bay Area in almost all market segments, means that there are too many buyers for the number of homes on the market. This leads buyers to bid against one another: Nothing leads to higher prices more quickly than this dynamic. 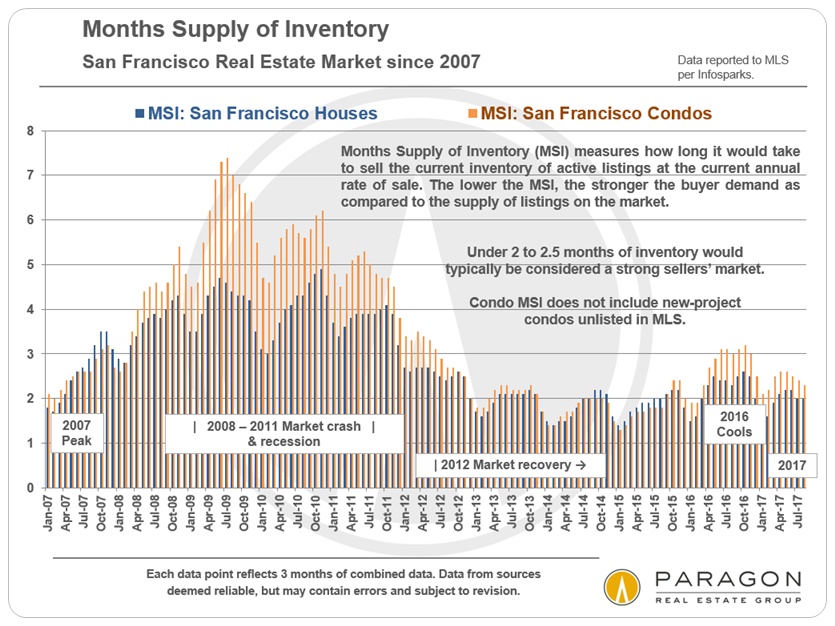 This chart is for SF, but the entire Bay Area has seen similar upward swings in home prices since 2012. In many ways, this chart is the result of everything that has been illustrated in previous charts in this report. However, it should be noted that the very considerable appreciation in home values has also increased the wealth of much of the population, which feeds back into the financial and psychological loops. 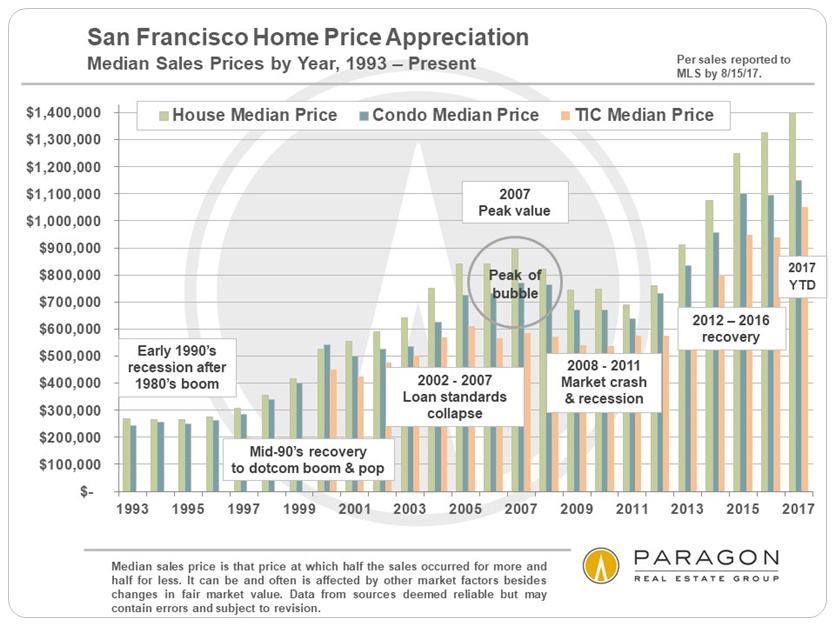 This very simplified, smoothed-out graph illustrates the percentage ups and downs in home prices over the past 30+ years per the S&P Case-Shiller Home Price Index for “high-price-tier” homes in the Bay Area: High-price-tier homes predominate in most of SF, Silicon Valley and Marin County, as well as in enclaves in other counties. Like other financial markets, real estate markets are subject to cycles. However, they are hard to predict because there is no hard and fast rule as to how long cycles will run. Booms can last longer than expected, or suddenly get a second wind, and downturns can come out of nowhere. There are so many churning, interactive economic, political and ecological factors in the mix nowadays, running from local events in the Bay Area to developments in China, Europe, North Korea and Middle East. 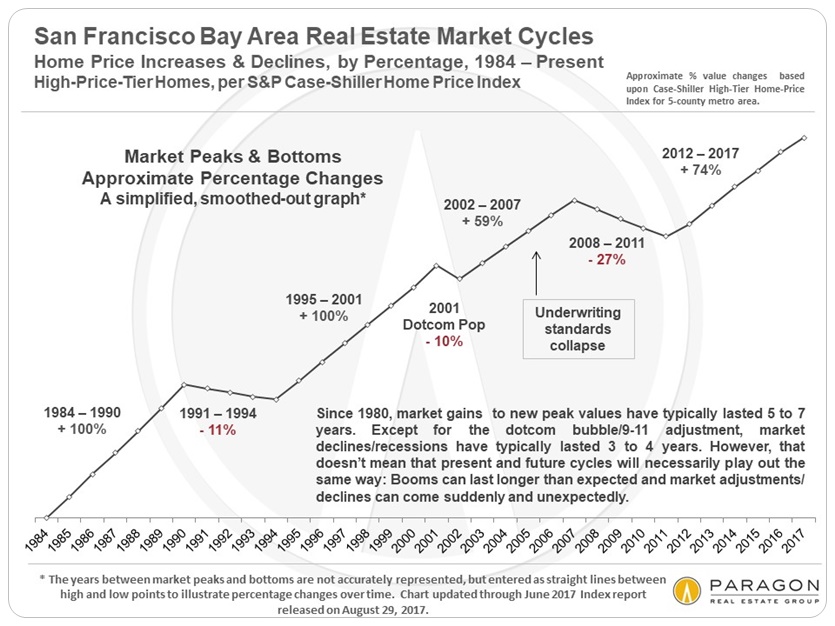 What has happened home prices in the Bay Area has also been occurring generally in the country, though our high-tech/bio-tech/fin-tech boom has certainly goosed appreciation here. However, it is interesting to see, that for the most part, the trends are quite similar over recent decades, with divergences for the 1989 earthquake, the dotcom boom and bust, and the most recent recovery. It will be interesting to see if the trend lines converge again as has happened in the past. 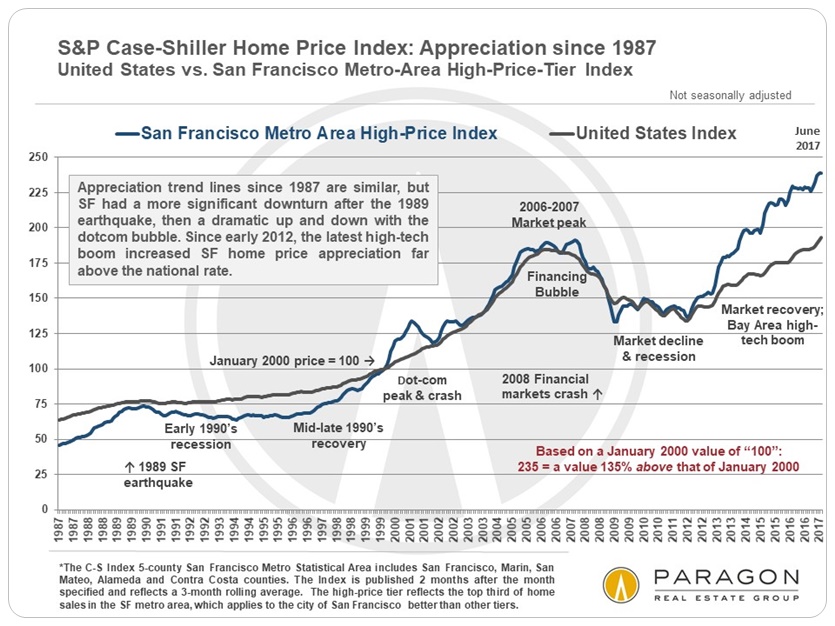 All the factors that have pushed up home prices have pushed down affordability. San Francisco and San Mateo Counties have the lowest housing affordability percentages in the state (and maybe the nation), but affordability has been rapidly declining around the Bay Area. When affordability gets too low, it starts to throw a wrench in some of the other components, like population and hiring. People and companies start moving away, poverty increases, start-ups start up elsewhere, rents begin to soften, and so on throughout the economic ecosystem. Housing affordability may be the biggest social, political and economic issue facing the Bay Area right now. 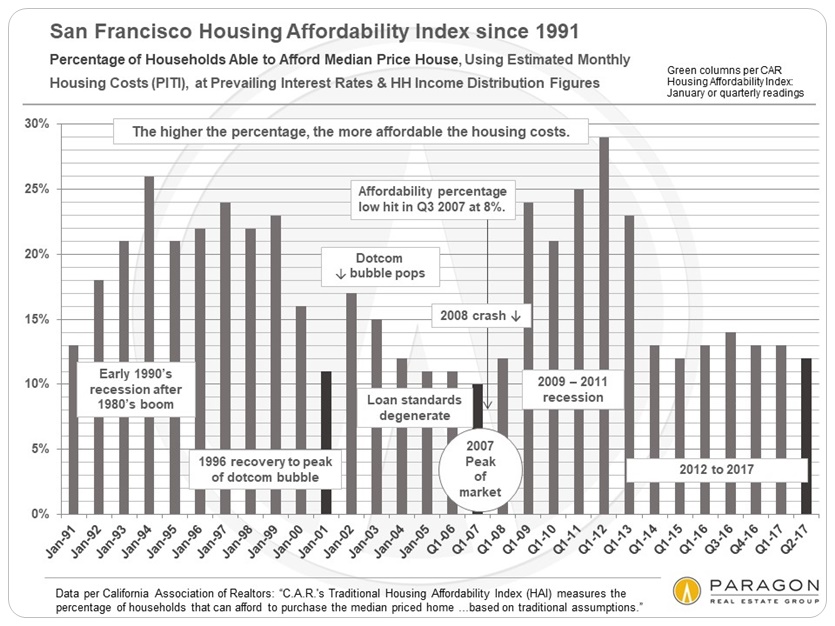 With statistics, one is almost always looking in the rear-view mirror, and, as anyone reading the news during the past year knows, the future is an unknown country. As they say in the standard disclaimer, past performance is no guarantee of future results.

All our many Bay Area real estate analyses can be found here: Paragon Market Reports

It is impossible to know how median and average value statistics apply to any particular home without a specific, tailored, comparative market analysis. In real estate, the devil is always in the details.

These analyses were made in good faith with data from sources deemed reliable, but may contain errors and are subject to revision. It is not our intent to convince you of a particular position, but to attempt to provide straightforward data and analysis, so you can make your own informed decisions. Median and average statistics are enormous generalities: There are hundreds of different markets in San Francisco and the Bay Area, each with its own unique dynamics. Median prices and average dollar per square foot values can be and often are affected by other factors besides changes in fair market value. Longer term trends are much more meaningful than short-term.