The nuclear meltdown situation in Japan is no less dire today as helicopters and water cannons are now being used to cool fuel rods and prevent spreading of radioactive material, but after utter market panic yesterday caused stocks and rates to drop, they’ve now reversed course almost entirely (Dow +166, S&P +21, and FNMA 30yr 4% MBS coupon -47 basis points). Rates rise when bond prices fall, and rates on loans to $417k are now 4.875% vs. 4.75% yesterday. Rates on condos and loan amounts above $417k are higher. [UPDATE: 1:36 ET: MBS now only down -16 basis points, rates will improve if this holds]

Two inflation figures today have influenced this shift in market sentiment. February consumer inflation, measured by CPI, was up 0.5% since last month and has spiked 2.1% since February 2010. Excluding volatile energy and food prices from CPI, ‘core’ inflation was up 0.2% since last month and up 1.1% since February 2010—’Core’ inflation is in the Fed’s 1-2% comfort zone, and the Fed focuses on ‘Core’ because food and energy prices change more in short term. Some argue that this ignores the fact that people eat and drive. Also, the Philadelphia Fed reported the highest manufacturing activity since 1984 in that region, and the report confirmed much higher inflation that’s now a several month trend in Philadelphia, Chicago, New York and national manufacturing reports. The ‘Philly Fed’ report showed that 64% of firms reported higher manufacturing costs, and 32% of firms reported higher prices for their own goods. 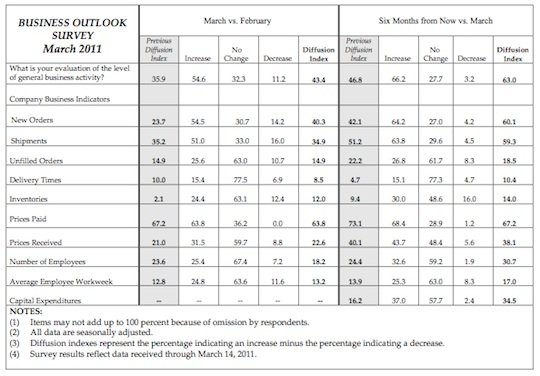