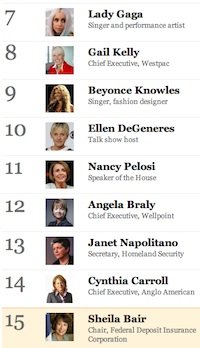 When it comes to powerful women, how does the FDIC’s Sheila Bair—our nation’s top bank regulator—stack up against Lady Gaga or Katie Couric?

When it comes to powerful banks, how do they rank for first quarter production? The big four banks originated a combined $186 billion in home loans, down 33% from $281 billion home loans written in 4Q2010, according to their financial statements. Servicing costs were up, each bank has hundreds of millions of dollars in reserves for buybacks on defaulted loans, and thousands of full-time and part-time jobs were eliminated. Here’s the breakdown by bank:

Regional Bank Earnings
The flow of regional bank earnings continued through the end of last week, with PNC’s net income coming in more than expected at $3.63mm, up 15% from the same period last year. NIM (net interest margin) was stable on flat loan growth and most of the improvement came from lower non-performing assets. No loan growth was reported. BB&T reported a 21% increase in earnings to $234mm, or slightly higher than expected. NIM and loan growth were largely unchanged from the quarter before and most of the earnings came from a 40% drop in provisions. Cap One posted profit that was 60% higher at $1B on better credit card recoveries and lower charge offs. 5th 3rd said net income rose to $265mm from a $10mm loss from a year earlier and SunTrust posted a $38mm gain compared to a loss of $229mm a year earlier. Both 5th 3rd and SunTrust had improvement due to better credit quality.

Jumbo Mortgage Bond Downgrades
In the past, the setting of jumbo loan rates was much more dependent on where the jumbo residential mortgage-backed securities traded. Now, prices are primarily set based on a spread to the investor’s cost of funds. Still, it is important to see what is happening with the price of existing jumbo securities, and it is not good news. Here is the WSJ and HousingWire on jumbo mortgage bonds being downgraded by ratings agencies.