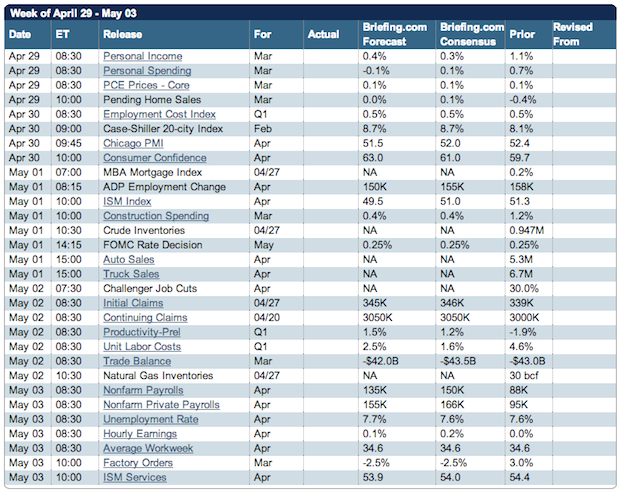 – Snapshot of U.S. data next week below, click image for details.

– Plus earnings season continues (calendar below)

Rates ended last week within striking distance of record lows, and could hold in the first two days of this coming week. Then it’s harder to predict. Wednesday’s Fed rate/QE policy announcement and Friday’s jobs report for April will set the tone. Rates started dipping when the March jobs report bombed on April 5. And rates have seen two spikes this year when minutes from the last three Fed meetings (which are released three weeks after each Fed meeting) revealed a growing consensus toward backing off the pace of QE by the end of the year. Wednesday’s Fed statement will be closely watched for any signals about this.
___
Also See:
– Fed and Jobs Report Cap Big U.S. Data Week (Patti Domm, CNBC)

– What To Watch Outside The U.S. (Forex.com)