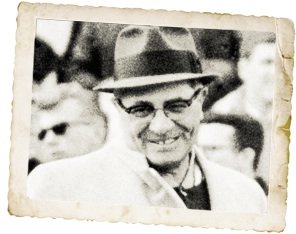 Since Vince Lombardi’s team just won the Vince Lombardi Super Bowl trophy last night, I keep thinking about his famous speech What It Takes To Be Number One, and specifically the line: Winning is not a sometimes thing. It’s an all the time thing.

I know he was a fierce competitor and all, but that dude never sold rates for a living. You simply can’t win all the time when you’re selling—whether it’s me selling mortgages, Vince Offer selling the Slap Chop, or you selling whatever you sell. So for all you salespeople out there, I’m taking some liberty and reworking Lombardi’s phrase to say: Selling isn’t a sometimes thing. It’s an all the time thing. Every industry has their motivational tactics and coaching gimmicks, but this simple phrase cuts to the core of every sales training you will ever engage in. Let me explain.

Obligatory sales training we’ve all sat through can be good if it’s technical training so you know your product better. But often it’s just filler being sold to you by someone who is doing what you should be doing. That sales trainer is in front of his customer: you. Selling is about being in front of your customers All The Time.

If you’re bogged down in other things, you simply can’t be there for your clients, which means you can’t sell. This really settled in for me in 2010, when I finally filled a big hole in my team … and more important, filled it with an ace employee. It changed everything. This was my second senior staff person. It was even more difficult for me to make this second hire than it was to make the first hire a few years ago. The economy is still wobbly, the mortgage industry is wildly volatile, and many other excuses.

But now that I’m coming around on one year of having another person, I realize that I was able to spend all of last year talking to clients and strategizing with my business partners. The result was that I put up my best year ever in 2010.

The 2 biggest reasons I’ve seen why salespeople can’t free themselves to sell all the time are (1) they’re in an organization where they’re unable to make their own hiring decisions and can’t get more support, or (2) they’re nervous about spending the money to get more support.

I’m in category #2, and a few years back, I was using cheaper, less experienced production managers and I spent more time training them and/or re-hiring when the person didn’t work out. So my model is spend the money on the right people, and it will work out— because they’ll enable you to go out and get enough business to make sure everyone gets paid.

As for category #1, that’s more challenging. I’ve been through that too when working for a bigger bank, and I have friends that are going through it today. But the harsh reality is that you either have to rally and produce more on your own to make the case for getting more help, or you have to find another place that enables you to make your own decisions.

And with that, I offer you Lombardi’s whole speech. Timeless motivation:

Every time a football player goes to ply his trade he’s got to play from the ground up – from the soles of his feet right up to his head. Every inch of him has to play. Some guys play with their heads. That’s O.K. You’ve got to be smart to be number one in any business. But more importantly, you’ve got to play with your heart, with every fiber of your body. If you’re lucky enough to find a guy with a lot of head and a lot of heart, he’s never going to come off the field second.

Running a football team is no different than running any other kind of organization – an army, a political party or a business. The principles are the same. The object is to win – to beat the other guy. Maybe that sounds hard or cruel. I don’t think it is.

And in truth, I’ve never known a man worth his salt who in the long run, deep down in his heart, didn’t appreciate the grind, the discipline. There is something in good men that really yearns for discipline and the harsh reality of head to head combat.

I don’t say these things because I believe in the ‘brute’ nature of men or that men must be brutalized to be combative. I believe in God, and I believe in human decency. But I firmly believe that any man’s finest hour — his greatest fulfillment to all he holds dear — is that moment when he has worked his heart out in a good cause and lies exhausted on the field of battle – victorious.