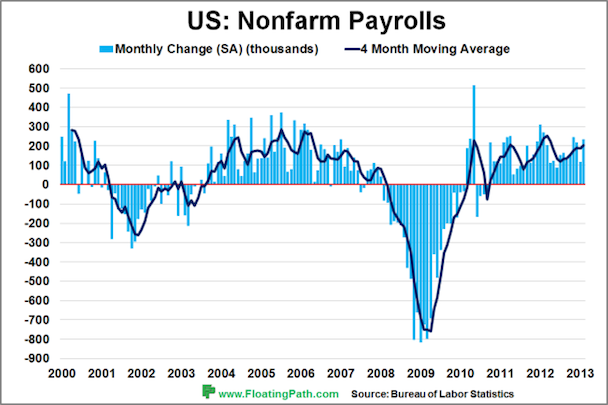 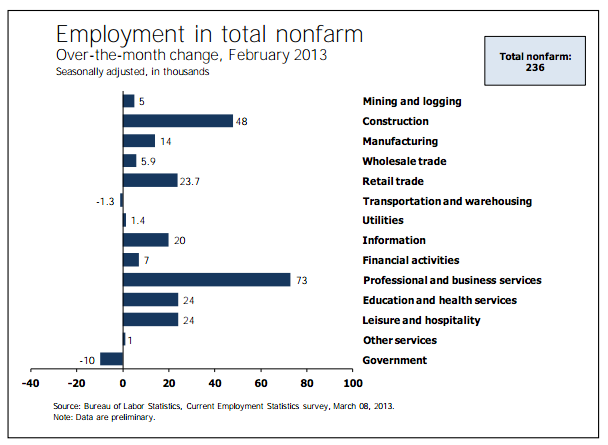 Rates are up today after a BLS report showed the U.S. economy added 236k nonfarm payrolls in February, well ahead of expectations of 160k, and January was revised down from 157k to 119k.

The February number is also well above the average monthly gain of 175,000 in the prior 6 months. Since reaching a low in February 2010, nonfarm employment has grown by 5.7 million. Growth in construction, professional and business services, retail, and leisure/hospitality jobs led the gains (see chart above).

Unemployment dropped from 7.9% to 7.7% according to a different component of the jobs report called the ‘Household Survey’ which counts people. There are 12 million people unemployed. Plus another 8 million people are working part time because their hours were cut or they can’t find a full time job. Not pretty, but still the nonfarm jobs gains are seen as positive by markets and bonds are selling. 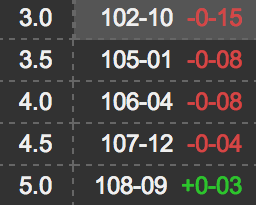 Rates rise when mortgage bond (MBS) prices drop on a selloff, and this table* shows that selling today in key Fannie Mae MBS coupons that lenders use as benchmarks for consumer rate pricing.

2013 RATE RECAP
Rates started rising January 3 when markets interpreted December Fed rate policy meeting minutes as indicating that the Fed would end quantitative easing (aka QE, which is Treasury and mortgage bond buying to keep rates low) by the end of this year.

But then MBS selling resumed and rates were .375% above all-time record lows within a couple days, and they held that higher level until three factors reversed the trend last week: Fed chairman Bernanke reaffirming commitment to QE, Italy’s election reminding markets of the eurozone’s debt troubles, and worries about U.S. budget cuts.

JUMBOS RATES ARE STEADY
One important note: jumbo loans above $417-625k (depending on your region) are not spiking. Comments above pertain to Fannie/Freddie mortgages and corresponding MBS. Jumbo loans are backed by private investors rather than Fannie/Freddie, and jumbo secondary markets are hot, which is helping keep jumbo rates steady while Fannie/Freddie rates are rising.

– Why The Jumbo Mortgage Market Is So Hot