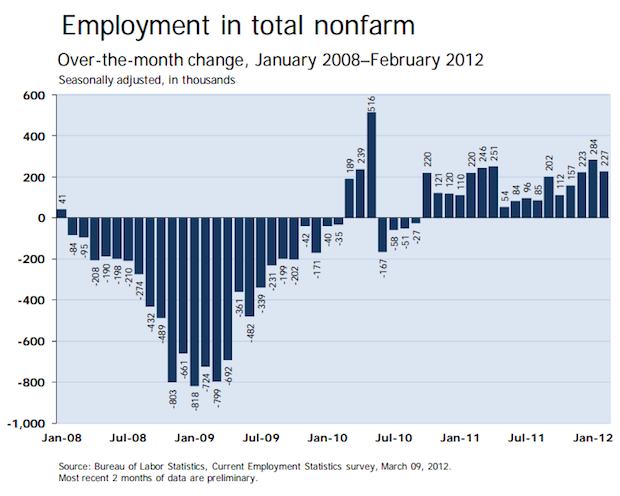 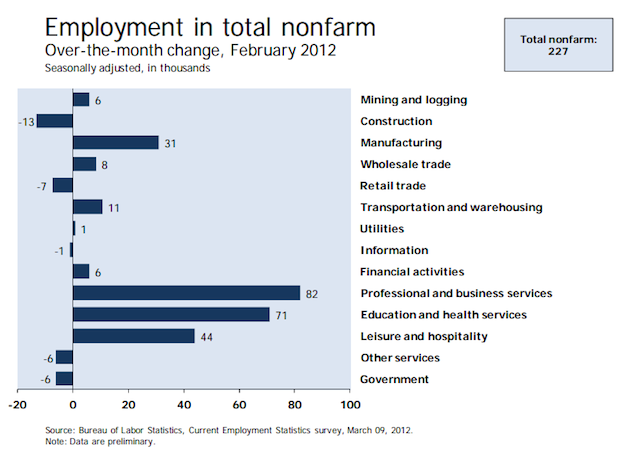 Over the last two years, non-farm payrolls have added 3.5m jobs. Of the 8.8m net jobs lost between the official recession start date of January 2008 and February 2010, 40% have been recovered.

Unemployment held at 8.3% according to a different part of the jobs report called the ‘Household Survey’ which counts people. This is the lowest since February 2009.

Rate Reaction & The Greece Factor
Rates rise when mortgage bonds (MBS) sell, and MBS initially sold after the news but have recovered and are about even on the day.

The 3.5% Fannie Mae coupon—a key benchmark lenders use to price consumer rates—is hovering around +5 basis points which translates into flat rates if this position holds.

The reason MBS aren’t selling on the better U.S. jobs report is because Greece also reached a debt deal with their private investors … if you can call it that.

The deal required that most private investors agree to take massive losses on a bond swap deal that’s a pre-condition of Greece receiving bailout fundes needed by March 20.

About 86% of private investors agreed voluntarily but they need more. So Greece is forcing the holdouts to get to around 96%. Doing so is likely to trigger payments on credit insurance—aka credit default swaps or CDS—that investors receive in the event of a default.

The body that decides if the CDS will be triggered is expected to do so later today.

The total payments are expected to be around $3b, which is considered small, but it’s uncertainty. And uncertainty keeps safe haven assets like MBS in favor, which keeps rates from spiking.

I’ll also reiterate what I said last night: Even with a better jobs report rates are unlikely to spike because…

… uncertainty about Greece’s machinations ahead of March 20 will keep a lid on selling safe haven assets like MBS—that and longer-term facts like: this doesn’t solve Greece’s root issues, and even larger debt trouble looms for other Eurozone nations.

[UPDATE 2:55pm ET: It’s official, CDS will be triggered. As noted above, the payouts on Greek CDS are not considered to be massive. But it’s a validation that Eurozone debt trouble is long-term and no single deal will solve the problem—so the trade after this news is to seek safety: MBS have moved up from +5 basis points to about +16 basis points on the day, not a big rally, but it’s possible some lenders may improve rates before the end of today if the rally holds.] ___
Further Reference:
–BLS January Jobs Report