UPDATE: The headline for this morning’s post below is now void because after March 13 Fed minutes were released, mortgage bonds (MBS) sold heavily.

Market interpretation of the minutes is that more rate stimulus is unlikely without substantial deterioration in economic conditions.

We’re now down 73 basis points on the 3.5% Fannie coupon that serves as a benchmark for rate pricing. Today’s chart from MortgageNewsDaily (used with permission) says it all.

This MBS drop off a cliff translates into rates .375% or higher if it holds. Rate spike to say the least. More to come, but it’s evolved from a quiet to a truly ugly trading day.

Mortgage bonds trading up just slightly today after yesterday’s gains. Translation: rates even. Yesterday mortgage bonds rallied despite better ISM Manufacturing in the U.S. (below) because European manufacturing reports showed weakness. This morning factory orders and retain are both looking a bit better, but not materially enough to cause a bond selloff that would push rates up.

The retail data could be skewed by the proximity of Easter which slides about the calendar. Easter and Thanksgiving offer unique problems to those assaying economic data.
____
And here’s yesterday’s Fundamentals that didn’t get posted due to a technical glitch 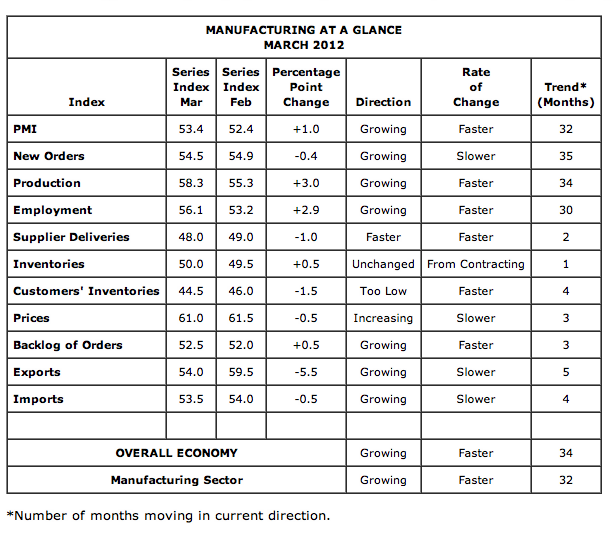 – Viewed as year-over-year the picture is not so bleak: