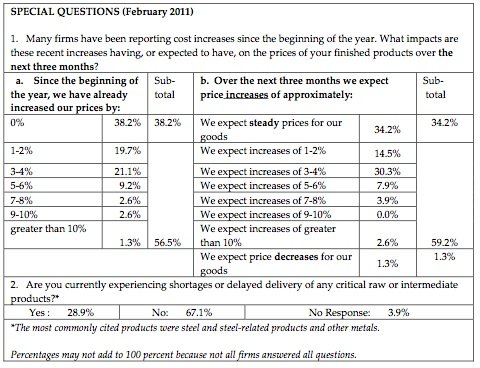 For now, rate markets are ignoring Philadelphia Fed’s survey of manufacturers’ outlooks today—known as the Philly Fed Survey. It showed inflation continues to be a serious issue. See the brief excerpt and also the table below on how manufacturers’ costs are rising, and more important how these costs are slowly being passed to consumers. It will be an issue later, but for now, rates are benefitting from perceived low inflation coming from the consumer reading.

Price increases for inputs as well as firms’ own manufactured goods were more wide‐ spread again this month. Sixty‐seven percent of the firms reported higher prices for inputs, compared with 54 percent in the previous month. The prices paid index, which increased 13 points in February, has now in‐ creased 55 points over the past five months. On balance, firms also reported a rise in prices for their own manufactured goods. The prices received index increased 4 points and has steadily increased over the past four months. Twenty‐nine percent of firms re‐ ported higher prices for their own goods this month, compared to 26 percent in January.