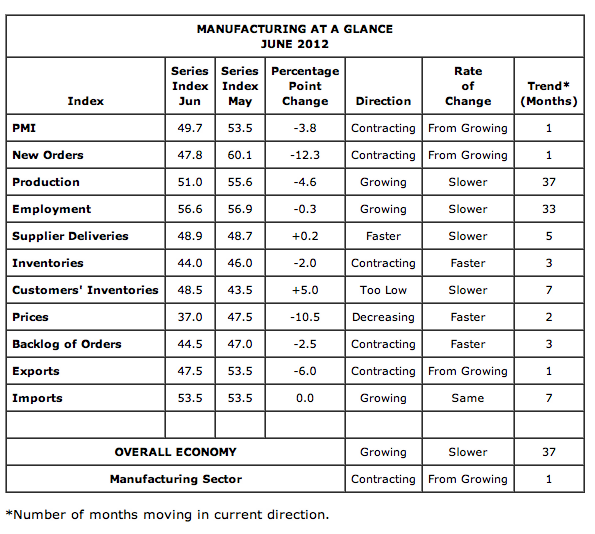 Rates are down to start this holiday-shortened trading week after June’s ISM manufacturing survey showed the first contraction in 35 months. Some respondents blamed the contraction on slowdowns in Europe and China. The Fannie Mae 3.5% coupon lenders use as a benchmark for rate pricing is up 36 basis points to 105.48 on the ISM news. Rates drop when bond prices rise like this.

The highlight of this week will be Friday’s BLS Employment Situation Report. Non-farm Jobs in May rose only 69,000, following increases of 77,000 in April and 143,000 in March. We need 116,000 more jobs each month to keep the Employment Participation rate the same to accommodate the increase in population.  Over the past three months we have been 53,000 jobs short of keeping pace with that.

U.S. economic concern is the tone to start the week. The only positive is that it keeps rates low.

Here’s more on the ISM report…

ISM Manufacturing Index (June 2012)
– Index Level 49.7.  Previous was 53.5.
– 50 is dividing line between expansion
– Until today’s June report, ISM manufacturing had expanded 34 straight months
– New Orders plunged from 60.1 in May to 47.8, the first contraction since April 2009
– This is the result of the supply side having gotten ahead of weak consumer demand and correcting.
– Full report here and chart/table below