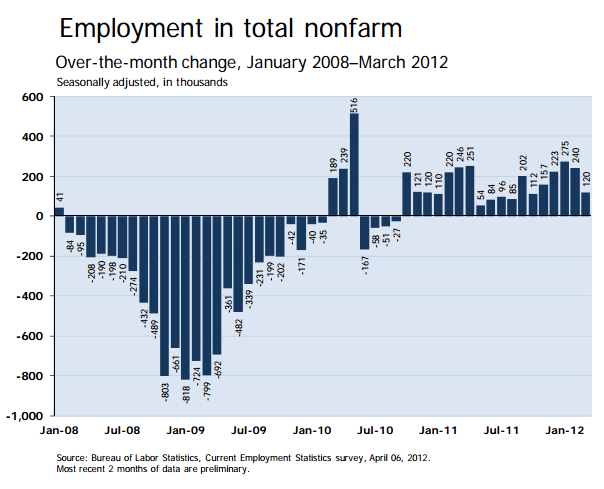 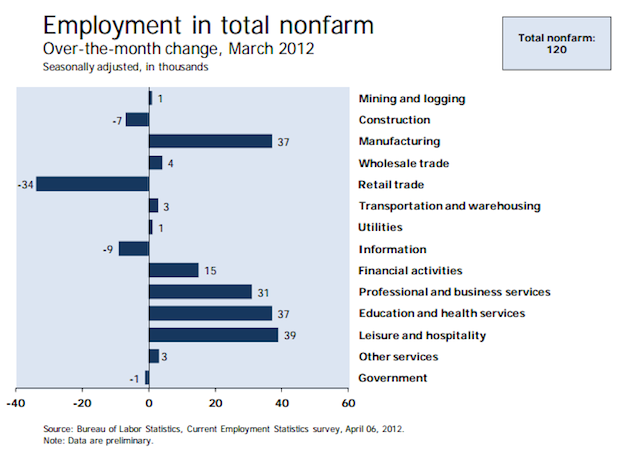 This morning’s BLS report showed the U.S. economy added 120k non-farm payrolls in March, well below the average monthly increase of 246k over the prior 3 months. Also 4k more jobs were created in January and February than previously reported: February revised from 227k to 240k, and January revised from 284k to 275k.

Since a recent employment low in February 2010, the economy has added 3.6m non-farm jobs. Despite today’s bad report, 41% of the 8.8m jobs lost between January 2008 and February 2010 have been recovered.

Unemployment dropped from 8.3% to 8.2% according to a different part of the jobs report called the ‘Household Survey’ which counts people.

This drop is more from unemployed people giving up job searches and leaving the work force than it is from people being hired.

This translates into about .125 to .25% lower rates. The drop should be on the upper end of this range but when it’s volatile like this (and before a holiday), lenders hold on lowering too much to see if rallies hold.

That said, today’s gains helped the Fannie 3.5% coupon blast above the 25 and 50 day moving averages. Reclaiming that 50-day line is especially important since we hadn’t closed above it since March 9.

I began the week saying:

Looks to be another volatile yet even (or slightly down) rate week unless markets can get some optimistic signals.

It’s been incredibly volatile. I was kicking myself for that outlook when MBS sold huge Tuesday pushing rates up about .375%.

But we’ve rallied since then and will end as predicted.