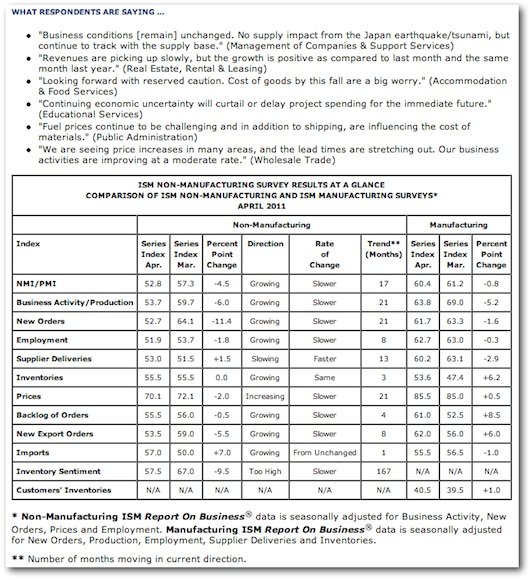 Mortgage bonds are in their third straight week of gains, trading just above their best levels of 2011 last set March 16. Rates drop when bond prices rise like this, and the benchmark FNMA 30yr 4% coupon that most lenders use to price consumer rate sheets closed up 16 basis points today, making a 13 session streak.

ADP, payroll provider to 23 million employees and 500,000 businesses, reported that private sector jobs increased by 179,000 in April. This was below expectations of 200,000.

Today’s ADP number is followed by weekly jobless claims tomorrow when we’ll find out if there’s a three week trend of higher claims (which would help rates maintain these levels), and then Friday’s all-important BLS jobs report.

Friday’s estimates call for 183k new jobs and 8.8% unemployment (vs. +216k and 8.9% for March). An upside surprise would cause bonds to retreat and rates to rise slightly.

Markets are again shaking off Institute for Supply Management data showing meaningful inflationary threats during April. Monday showed the trend in manufacturing sectors, and today is the same in non-manufacturing businesses.

Normally bonds would sell and rates would rise on inflation fears (since inflation erodes purchasing power of a bonds future cash flows), but other weak economic factors are making traders fall in line with the Fed’s theory that inflation is short term. Below is a table with inflation warning comments and results from the ISN Non-Manufacturing report.

Also U.S. bonds are rallying despite inflation signals because Portugal yesterday agreed to a three-year $116 billion bailout with the EU and IMF. Their bailout comes after Ireland and Greece suffered the same fate. And again, U.S. bonds are benefitting as European bonds sell.

Rates are unquestionably excellent, and while technical trading patterns for bonds are improving to suggest we could be somewhat steady at these levels in the coming days, it’s all going to depend on Thursday’s and Friday’s jobs data.