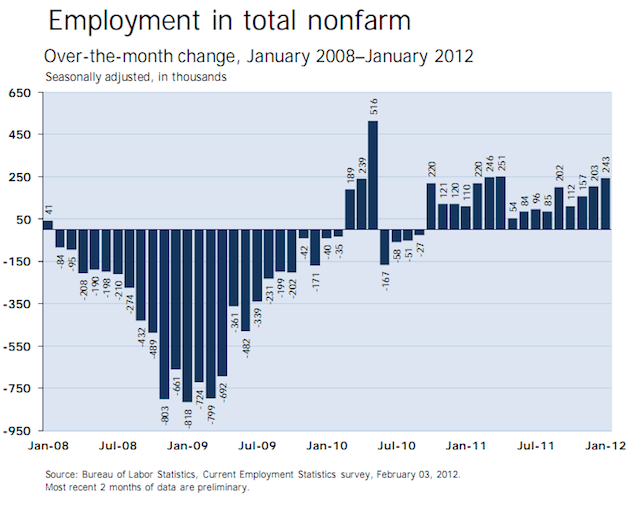 Rates rose after this morning’s BLS report showed the economy added 243k non-farm payrolls in January, the most since April 2011 and beating expectations of 135-145k.

This figure doesn’t count actual people, it counts how many companies opened or closed, then uses that data to estimate the number of jobs gained or lost.

Unemployment dropped to 8.3% from 8.5% according to a different part of the jobs report called the ‘Household Survey’ which counts people. This is the lowest since February 2009.

Rates rise when mortgage bonds (MBS) sell, and today’s selling trend breaks a two month-theme. Up to today, MBS initially sell on better U.S. economic news like this, then recover. But we’re not recovering this morning since jobs were a definitive upside surprise.

The 3.5% Fannie Mae coupon—a key benchmark lenders use to price consumer rates—has been down as much as 52 basis points which translates into rates .125% to .25% higher if the selloff holds. But impending Eurozone trouble continue to temper selloffs to keep rates from spiking: 30yr fixed single family home loans to $417k look like they’ll still end the week below 4%.