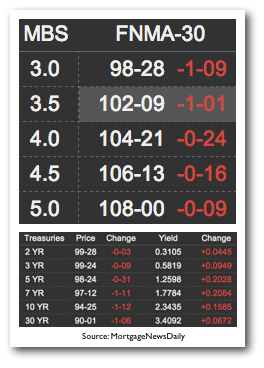 This morning’s January jobs report is confusing because only 36,000 non-farm payrolls were added yet unemployment dropped significantly from 9.4% to 9%. Mortgages sold heavily on the unemployment figure, pushing rates up to 5.125% for single family loans to $417k—larger loans and condo loans are higher. But rates rising .375% this week isn’t just from the jobs data, it’s largely from manufacturing surveys showing higher activity and prices. This business inflation hasn’t translated into higher consumer inflation yet, but bonds are selling on the bet that it will.

As for the jobs report, below is a chart showing non-farm payrolls added by sector. Also below are two clear explanations of how to interpret today’s jobs report. First is from CalculatedRisk explaining how the jobs data is compiled. Second is from ZeroHedge explaining why this report is worse than markets think. But for now, rate markets are taking the jobs report along with the week’s manufacturing data as a sign of improving economic conditions. And this pushes rates higher. 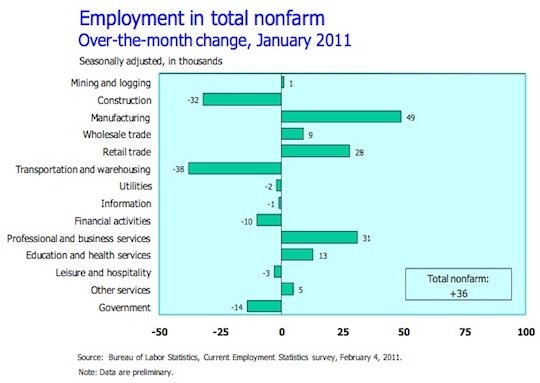 How can the unemployment rate fall sharply if the economy is adding so few jobs, especially since the population is growing?

At 64.2%, the labor force participation rate (as a percentage of the total civilian noninstitutional population) is now at a fresh 26 year low, the lowest since March 1984, and is the only reason why the unemployment rate dropped to 9% (labor force declined from 153,690 to 153,186). Those not in the Labor Force has increased from 83.9 million to 86.2 million, or 2.2 million in one year! As for the numerator in the fraction, the number of unemployed, it has plunged from 15 million to 13.9 million in two months! The only reason for this is due to the increasing disenchantment of those who completely fall off the BLS rolls and no longer even try to look for a job. Lastly, we won’t even show what the labor force is as a percentage of total population. It is a vertical plunge.