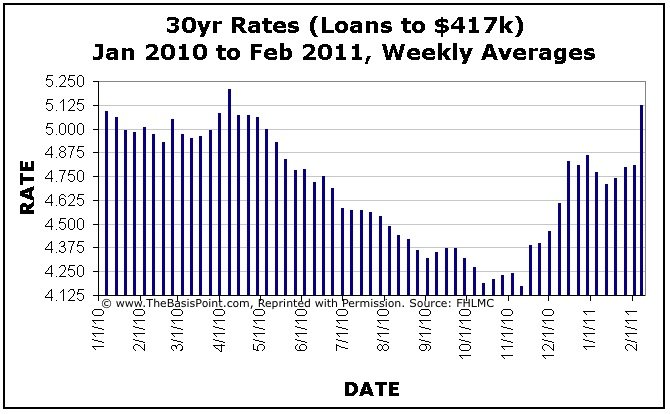 It’s been a tough 2 weeks for rates, and 30yr fixed loans up to $417k are about 5.125% this morning—rates for condos and for larger loan amounts are higher. Mortgage bonds have been in an ongoing selloff on improving GDP, higher U.S. business inflation, and higher consumer inflation in emerging markets like China, India, and Brazil. Bond investors fear inflation because it means the annual income they’ll get from their bonds has less purchasing power in the future. And when bond investors sell on inflation and improving economic data, bond prices drop and yields (or rates) rise.

The chart below is through today (click for full size). It shows a big rate spike in the past 2 weeks. And it also shows some key dates. The rate peak on April 1, 2010 was one day after the Fed stopped Quantitative Easing round one, which was focused on buying mortgage bonds to help rates. Then the European debt crisis hit and bond investors fled European debt and bought mortgages, bringing rates down. On October 1, the Fed said they may begin round two of quantitative easing (QE2) early-November, but when the November announcement came, they said they’d no longer support mortgages, and focus on Treasuries instead. This plus the factors noted above have caused this rate spike.