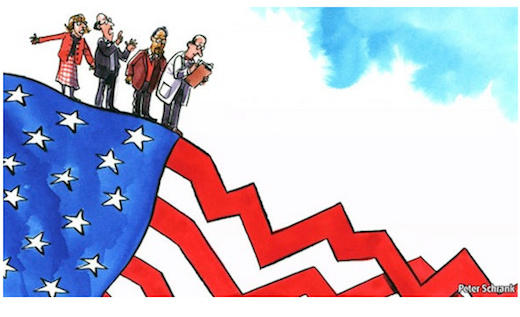 Rates dropped .125% last week after a string of bad economic reports. Rates touched all-time lows momentarily Thursday after a six-day mortgage bond rally, then retreated (but held 2011 lows) after a less bad July jobs report Friday. After Friday’s close, S&P downgraded U.S. debt one notch from AAA to AA+ with the promise of further downgrades if politicians can’t get our fiscal priorities straight.

The quote of a rough market week came Friday—before the open and before S&P’s downgrade—from Crossing Wall Street: “All across the board, investors are dumping risk and hoarding security. Fear is giving greed a major beat-down.” Now the question is: will that theme hold for bond/rate markets next week?

That statement continued to be true for stocks in a highly volatile session Friday, but the “hoarding security” theory broke down for bonds: mortgages (FNMA 4% coupon) were down a massive 100 basis points. Rates rise when bond prices fall like this and that’s why rates went back up Friday.

Then came the S&P downgrade.

Lots of hysteria this weekend about an event that had been telegraphed for months. Not to mention that bond markets measure the creditworthiness of Treasury securities every day regardless of what a ratings agency says.

There’s been a theory for weeks that U.S. debt—which includes Fannie and Freddie mortgage bonds since the government backstops these agencies—is a safe haven for its own downgrade because it’s the least bad option.

Treasury and mortgage bonds have been in high demand since last year on fears about Europe’s own debt crisis, and weak U.S. economic data. This is why rates are low. Again, when bond prices rise on demand, yields (or rates) drop.

Next week’s economic calendar is pretty light, with the highlights being a Fed meeting and press conference Tuesday and $72b in new Treasury debt auctioned into markets as follows: $32b 3yr Notes Tuesday, $24b 10yr Notes Wednesday, $16b 30yr Bonds Thursday.

I think fear will continue to overpower greed next week (rates down), and I also think the downgrade could adversely impact bond market sentiment (rates up). So rates will continue to be volatile, but I don’t see a massive bond selloff and rate spike on downgrade news.

That said, nobody truly knows because we’re in uncharted territory. It’ll be another wild week and we’ll have to take it day to day, starting Monday morning. You can follow along on Twitter or Facebook.