Is there a better song to convey the rate market’s need for stimulus than Ministry’s Just One Fix?

Today we’re exactly one month into QE3, the latest rate market fix dispensed by the Fed. In their September 13 announcement, the Fed said they’d buy $40b per month in agency mortgage bonds (MBS) to “support a stronger economic recovery.” Or more directly: to lower conforming and FHA mortgage rates—because rates drop when bond prices rise on net MBS buying.

The result: rates dropped .125% and have hovered between current levels and .25% higher.

In other words, it’s the perfect back alley definition of a fix: just enough to keep this good rate and housing feeling going. But without the fix, the change could be violent and disruptive. So the Fed keeps giving just one more. Here’s a recap:

This is the third round of quantitative easing, also known as QE3.

Then as 2011 continued, global macroeconomic weakness led us to need just one more fix.

Next came a sort of QE2.5 (my word, they don’t call it that) that began September 21, 2011 when the Fed announced that they’d buy more MBS using proceeds from principal payments received from MBS they already hold. And they hold plenty: they bought $1.25 trillion of MBS during QE1.

Here’s a good chart (through 9/21/2012) from American Century Investments showing the impacts of all QE rounds on Conventional and FHA rates, and here’s their post describing the chart.

So just how much is the Fed carrying the rate market anyway?

The Fed’s September 13 announcement about QE3 also noted that the $40b per month in MBS buying for QE3 would be in addition to the QE2.5 MBS buying they’ve been doing since last September.

This means the Fed is buying up most of the supply out there.

According to a Reuters MBS report released yesterday, agency MBS issuance so far in 2012 is $1.22 trillion (tables below). Between October 12 and November 13, Reuters MBS analysts project the Fed will buy about 3.5b in MBS per trading day, or about $77b for one month.

If you annualize this, it equates to the Fed buying about 57% of total MBS supply. And in a couple of these early QE2.5 plus QE3 weeks, Fed MBS buying has eclipsed mortgage banker supply issued during the same period. 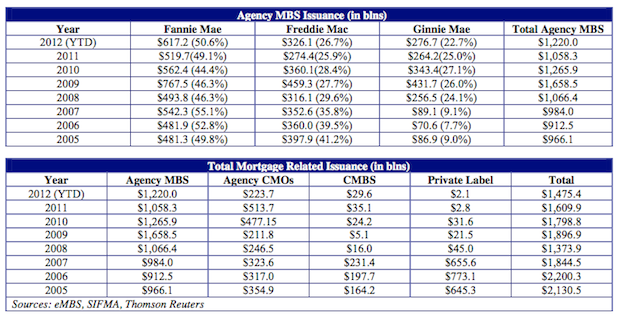 This is why I say rate market and broader housing market change could be violent and disruptive if the Fed wasn’t involved.

So they keep on with just one more fix* until some housing and broader economic self-sustainability reveals itself.

The broader implications are anyone’s guess. But if you’re buying or refinancing a home right now, it gives you the low rate fix of a lifetime.

As for self-sustainability of housing, some are saying we’re already in a new housing boom.

Stay tuned: Twitter | Stocktwits | Facebook
___
*As followers of TheBasisPoint know, I’m in the midst of The 31 Days of Rocktober, an off-topic music blogging exercise just for fun. I’ve been asking friends to submit song picks for me to write up and Mark Brian, a South Carolina realtor and one of my favorite housing pros on Twitter, offered Ministry’s Just One Fix. This is what my writeup became. But I should add that Mark is a fellow headbanger, and he didn’t disappoint. Ministry has been a force in industrial metal for decades, and I’ve been a fan most of that time. Fun facts about this 1992 song: it samples Frank Sinatra saying “Just One Fix” from the movie The Man with the Golden Arm, and the video features Beat author William S. Burroughs. As for Mark, this guy is a monster on Twitter with 13k+ followers, yet he’s still somehow fully engaged. Follow him to learn how it’s done.