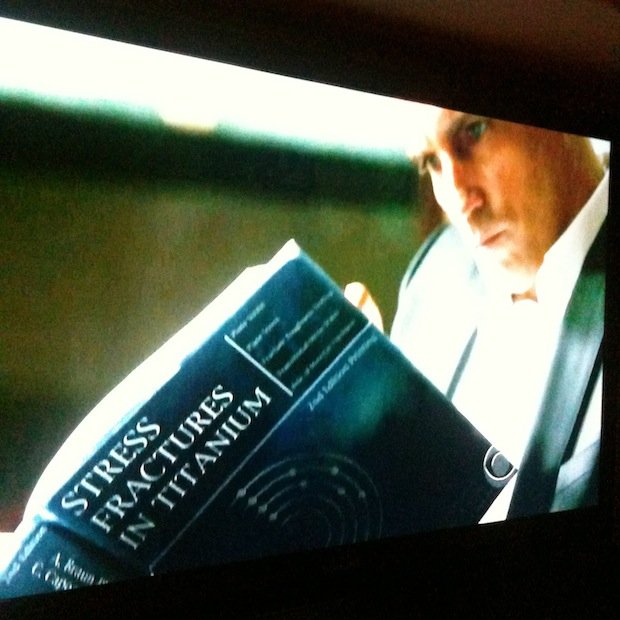 “Lady why you so interested in what I read or what I do?”

Remember that feeling you’d get watching 24? You know, that Jack Bauer is SUCH a badass?

Well now that season one of CBS’s Person Of Interest is done (tonight), we’ve got our replacement: Jim Caviezel’s Reese.

Same back story: Former CIA plus all kinds of off-the-grid, you-don’t-exist type cred.

But critical difference: Bauer was a powder keg and Reese is stoic as a statue. Even when beating down like 10 dudes, blowing some shit up, or getting you to tell him what he needs to know one way or another.

Caviezel’s Reese is utterly unflappable. And the production value of the show is stylized and subtle. So subtle that I wasn’t into it until a few weeks ago. My wife liked it so I’d idly watch while writing or whatever, and we’d been calling the show Person of Mild Interest.

Then we watched two recorded episodes last week, the first of which had a passing shot of Reese reading a book titled Stress Fractures In Titanium.

Then it hit me: the book, Reese’s signature tie-less suit … the show isn’t taking style cues from 24, it’s taking them from crime drama king Michael Mann.

The Reese reading shot (below) is a nod to a sequence in Mann’s best-crime-movie-ever-made, Heat, in which DeNiro’s Neal McCauley acquires a book of the same name in prep for his next score. In Heat, the book cover is never shown. McCauley is shown perusing in the bookstore (also below) then a woman sitting next to him at a restaurant’s breakfast counter eyes the book and says: “Stress Fractures In Titanium. What kind of work you do?”

A very obscure 1995 movie reference, I know. But that’s the point. And true Mann/Heat fans will agree: that’s as deep as it gets.

Needless to say, we instantly upgraded our show nickname to Person of Considerable Interest.

What’s the show about, you ask?

Reese’s billionaire computer-geek partner Finch developed this machine for the government to monitor literally all systems as a way of detecting terrorism early. But it was going to be used for ill so he took The Machine, went underground, and the two use it to detect violent crimes before they happen. Then Reese goes in and regulates.

It’s got more intricate story threads too, but you get the gist: high budget action/crime show by the people who brought you The Dark Knight, Memento, Alias, and Lost.

And if you’re wondering: why the TV post on a housing blog? Answer: pop culture and music posts help lighten the mood and keep the flow.