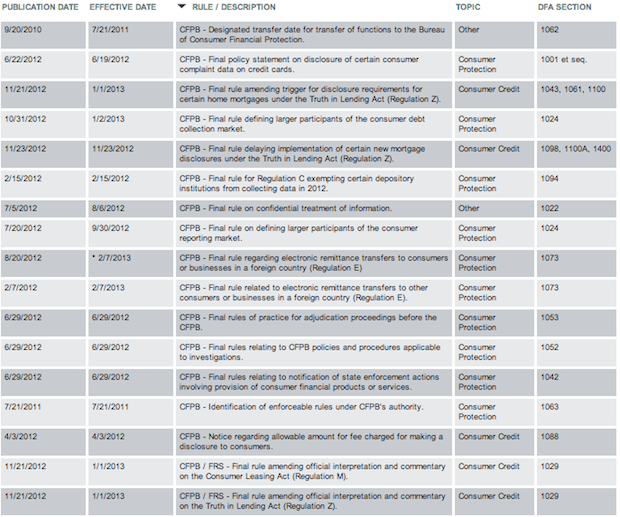 This was a huge week for the CFPB, which is the mortgage industry’s new regulator and is arguably has the biggest impact on housing in the coming years. So today’s Originations linkfest, like Monday’s, is again mostly focused on new regs for the mortgage industry. A lot of good work and analysis being done out there. Here’s the rundown for now (there’s more coming as more rules are announced)…

– CFPB in their own words: “New rules, fewer runarounds for mortgage borrowers” (CFPB)

– How The Qualified Mortgage Rules Could Hit The Jumbo Market (Nick Timiraos, WSJ)

– St. Louis Fed’s list of upcoming Dodd Frank rules. Table below is CFPB’s rules only (and actually doesn’t include all the housing rules). And the link has rest of Dodd Frank broken down by agency (St. Louis Fed)

Certain mortgage bankers are using a four-letter word to describe the trifecta of “final” regulations unveiled by the CFPB the past two weeks, and as you might guess that word isn’t “love.” The rules – servicing, qualified mortgages and loan originator compensation – will shape the industry for years to come. Everyone knows that. But there’s a financial calculation involved as well: just how much more will all these regulations cost the industry? Will some decide to get out while the getting is good? A few months back we talked to the CEO of a Houston-based nonbank who told us he had almost 20 people working in his compliance department. Two years prior that number was five. Yes, mortgage lenders are going to pay more because of the new regulations – how much more remains to be seen. But it’s no secret how that cost will be funded: it will be passed on to the consumer…

– Having Fits With Appraisal In Homebuying Process (Jonathan Miller, Matrix)