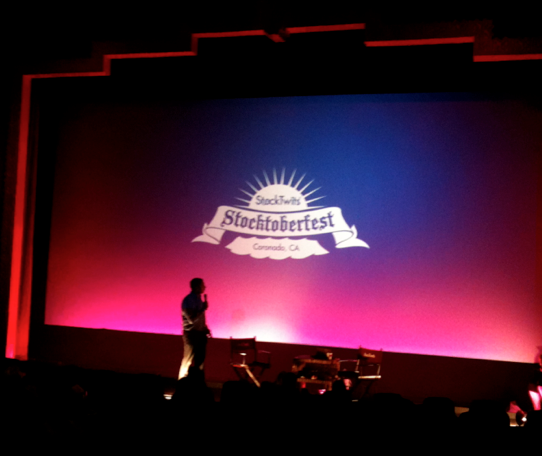 Checking in with tonight’s installment of The 31 Days of Rocktober after a long first day at Stocktoberfest 2012, a conference hosted by Stocktwits.

For those who don’t know about Stocktwits, it was created in 2008 by Howard Lindzon as a Twitter-like platform to follow stocks and securities, and it has evolved into the best place for realtime financial market and investing insights on the web. Stocktoberfest is a conference to bring the realtime stream to real life by gathering investors, entrepreneurs, money managers and the Stocktwits bloggers into one place for a couple days to network and discuss market and technology trends on the horizon.

Howard is pictured above formally kicking off the event tonight. TheBasisPoint has been a proud member of the Stocktwits blog network since last December, and this is the second event of Howard’s I’ve attended this year. And just like the last one, you simply can’t have a bad conversation. The place is littered with smart, cool, normal people.

One such person is Sean McLaughlin, a lead curator of the Stocktwits streams along with executive editor “Dr Phil” Pearlman. Sean’s been following The 31 Days of Rocktober so I asked him what the official song of Stocktoberfest should be.

His immediate response: Stack Shot Billy by The Black Keys, off their third album Rubber Factory.

So below is Stack Shot Billy in tribute to Sean, who’s shot thousands of bad posts down to keep the Stocktwits flow clean over the years.

But like I said to him: as awesome a song as it is, it’s still not quite a good enough song title to be the official song of Stocktoberfest. For that honor, I’m going with Heavy Soul, off The Black Keys 2002 debut album The Big Come Up.

Heavy soul is a key trait of everyone at Stocktoberfest, and it’s why the Stocktwits community continues its big come up…