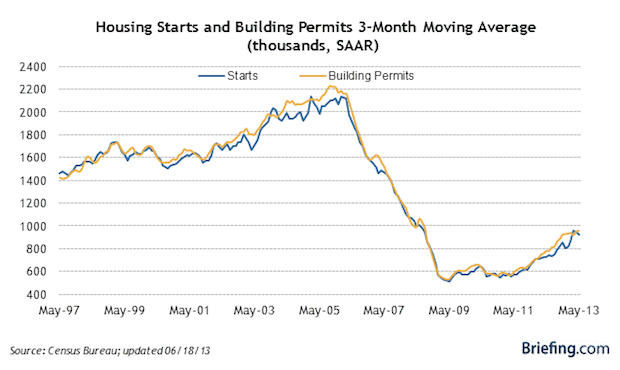 Rates are up today as mortgage bonds continue yesterday’s selling–Fannie 30yr 3.5% coupon down 5 ticks (a tick is 1/32), and the 10yr Note yield is at the top end of it’s technical range of 2.09% to 2.20%. Some headlines are attributing bond losses and stock gains to higher new home construction data this morning, but a closer look at the numbers below warrants some caution. And speaking of caution, the bond market selloff this week is due largely to traders waiting to see the outcome of tomorrow’s post Fed meeting rate policy announcement and press conference.

– The housing data is weaker than expected.

– Here are a few important notes and a chart from Briefing.com:

– While the gain in starts was strong, it is still 9.1% below where it was in March when 1.005 mln homes were started. It was wishful thinking that starts could rebound as quickly as the consensus expected.

– Most of the drop in starts in April was the result of a massive pullback (32.2%) in multifamily construction. This volatile sector had been running much hotter than its long-term trend and starts will unlikely return to pace any time soon.

– The more worrisome trend is that single-family starts only rose a minuscule 0.3% in May from 597,000 in April to 599,000. This sector tends to be very stable. The lack of solid rebound after 4.2% decline in April could signal a slowdown in overall construction levels.

– Still, the number of homes under construction rose from 606,000 in April to 620,000 in May. The 2.3% increase should be enough to keep residential investment growth as a main contributor to second quarter GDP growth.

-The rebound in construction levels still leaves it 9.1% below where it was in March.

– Store Sales are indicative of the prolonged slow growth state of the economy.
___
$XHB, $ITB