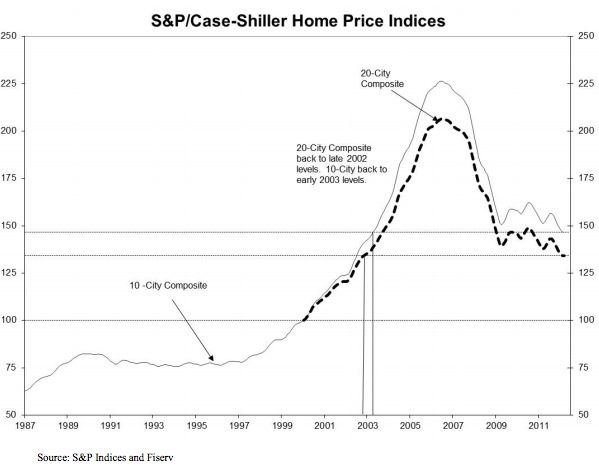 This chart shows home prices bumping along the bottom and dropping to new lows. The years before that mid-2006 drop off was a U.S. housing binge of rock star proportions, and everyone knows a binger must hit bottom before they can begin recovery. So is U.S. housing ready for rehab?

The chart is from yesterday’s March Case Shiller home price report that showed home prices across 20 major metro areas were even in March, down 2.6% year-over-year through March, down 35% from 2006 peak levels, and to repeat an important point: prices hit new lows.

Really? What about all this talk of buyer bidding wars recently? It’s real… in some places. Here’s how Case Shiller breaks down pricing in their 20 key regions: 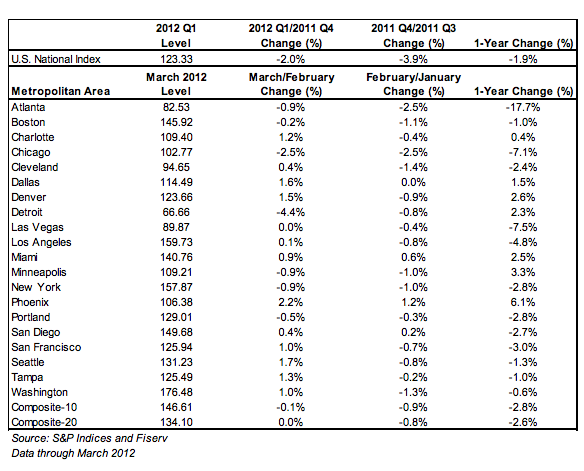 But keep in mind that this is pretty old data even though it was released yesterday. It’s important to understand Case Shiller methodology before you put too much weight on the headline figures. Here are the key points:

If you look at what was going on in your market 5-6 months ago compared to now, it could be a lot different. It certainly is where I am.

“San Francisco” in the table above is a five-county Bay Area region where property types and especially prices vary wildly. The actual city of San Francisco contains only 7% of the single family home sales used for the “San Francisco” pricing in the table. Here’s a breakdown: 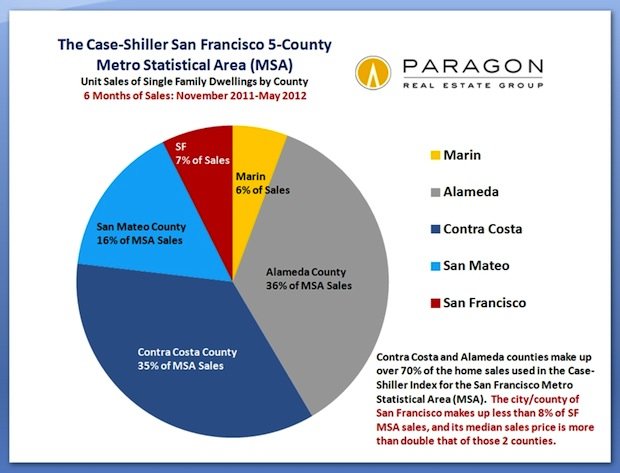 The Case Shiller “San Francisco” region is about 40×70 miles. San Francisco itself is only 7×7 miles. It’s divided into 10 districts. Then the 10 districts are divided into 86 sub-districts, which are the neighborhoods. Until you drill down to this level, then down to the streets, you can’t price a home accurately.

The same goes for all cities and towns.

So Case Shiller is a good metric of broader housing mood, but it can’t be solely relied on to make local home buying and selling decisions. To do that, you need to look at the data on the ground where you live (and if you have good data/stories of what’s going on in your local market, email me).

As for my opening question, has U.S. housing hit bottom after an epic binge and now ready for rehab?, I said it in jest but look at Step 1 of the famous Alcoholics Anonymous 12 Steps to recovery.

We admitted we were powerless over alcohol – that our lives had become unmanageable.

Substitute ‘housing’ for ‘alcohol’ and it’s a pretty good take on what’s been going on across the U.S. since mid-2006. So yes, I’d say we’re on our way. But we’ve got a long way to go.
___
Source:
–Case Shiller March Home Price Report
–Case Shiller methodology