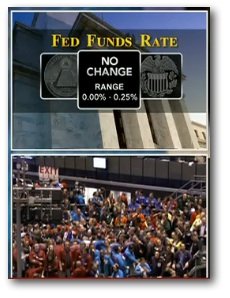 Today’s Fed statement acknowledges economic recovery is on “firmer footing,” and while the Fed acknowledges inflationary concerns, it’s choosing to ignore inflation pressure for now and keeping overnight bank-to-bank target Fed Funds Rates at 0-.25%, and keeping the overnight Fed-to-bank Discount Rates at .75%. They also said they’d keep going with their second round of quantitative easing (QE2) by continuing to purchase Treasury securities between now and June 30 to keep overall rate levels in the economy low.

All voting FOMC members voted for this policy stance. Throughout 2010, Kansas City Fed president Thomas Hoenig was the lone dissenter (and still is) on this zero-rate policy stance but now that he’s rotated off the FOMC, nobody else is bringing balance to the zero-rate stance. It’s not that the Fed is outright ignoring inflation, but it just means they’re not communicating clearly about it, which will mean a much bigger jolt to markets (especially rates) when they begin to telegraph the end of this zero-rate stance by saying they’ll sell bonds and/or hike overnight rates. Consumers should strongly consider grabbing low rates while they can, because these rates aren’t going to last for as long as people think. TODAY’S CASE IN POINT: rates were .2% better this morning before the Fed announcement and reversed completely as mortgage bonds have sold drastically since the announcement acknowledged inflation pressure. It’ll only take a small bit of inflation for rate markets to reverse more, and the latest inflation data comes out tomorrow (PPI business inflation) and Thursday (CPI consumer inflation). Today’s full Fed statement is below. It doesn’t address anything about Japan, Europe, or the Middle East, which are three main drivers of rate market trading currently, but dire situations in all three of these regions are actually helping the Fed’s low rate case right now.

FULL 3/15/11 FOMC STATEMENT
Information received since the Federal Open Market Committee met in January suggests that the economic recovery is on a firmer footing, and overall conditions in the labor market appear to be improving gradually. Household spending and business investment in equipment and software continue to expand. However, investment in nonresidential structures is still weak, and the housing sector continues to be depressed. Commodity prices have risen significantly since the summer, and concerns about global supplies of crude oil have contributed to a sharp run-up in oil prices in recent weeks. Nonetheless, longer-term inflation expectations have remained stable, and measures of underlying inflation have been subdued.

Consistent with its statutory mandate, the Committee seeks to foster maximum employment and price stability. Currently, the unemployment rate remains elevated, and measures of underlying inflation continue to be somewhat low, relative to levels that the Committee judges to be consistent, over the longer run, with its dual mandate. The recent increases in the prices of energy and other commodities are currently putting upward pressure on inflation. The Committee expects these effects to be transitory, but it will pay close attention to the evolution of inflation and inflation expectations. The Committee continues to anticipate a gradual return to higher levels of resource utilization in a context of price stability.

To promote a stronger pace of economic recovery and to help ensure that inflation, over time, is at levels consistent with its mandate, the Committee decided today to continue expanding its holdings of securities as announced in November. In particular, the Committee is maintaining its existing policy of reinvesting principal payments from its securities holdings and intends to purchase $600 billion of longer-term Treasury securities by the end of the second quarter of 2011. The Committee will regularly review the pace of its securities purchases and the overall size of the asset-purchase program in light of incoming information and will adjust the program as needed to best foster maximum employment and price stability.

The Committee will maintain the target range for the federal funds rate at 0 to 1/4 percent and continues to anticipate that economic conditions, including low rates of resource utilization, subdued inflation trends, and stable inflation expectations, are likely to warrant exceptionally low levels for the federal funds rate for an extended period.

The Committee will continue to monitor the economic outlook and financial developments and will employ its policy tools as necessary to support the economic recovery and to help ensure that inflation, over time, is at levels consistent with its mandate.