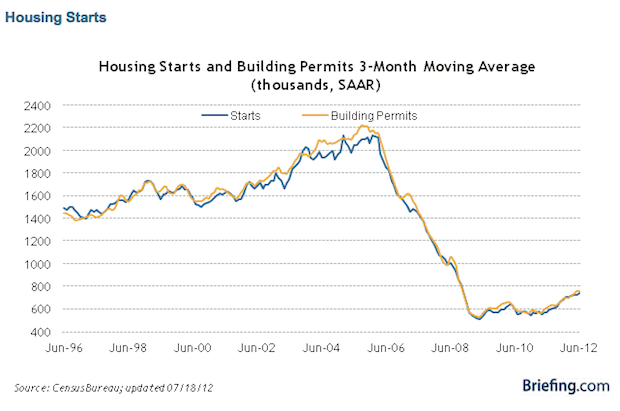 Starts were improved and, in fact, at the highest level since October 2008—the month after Lehman went under. The downturn in Permits indicates the tenuous state of housing.

We need 1,500,000 Housing Starts per year to keep pace with population growth. That means that either the number of people/household will increase or we will have a housing boom when there is economic recovery. According to RealtyTrac, Notices of Intent to Foreclose were up 6% in 2Q2012. Is the shadow inventory coming out of the shadows?

Here’s a good Briefing.com chart that puts things into perspective:

Refinance applications are rate driven and the record low rates of last week produced this spike. The purchase applications number is disappointing. Refinancing is an economic stimulus. Not only does it make money for folks in the mortgage business but refinancing in the past three years has freed up at least $50 billion a year in cash that borrowers can now spend. The recent wave or refinancing will drive that number up. This $50 billion will be there every year.  Here’s a WSJ piece from May with more.