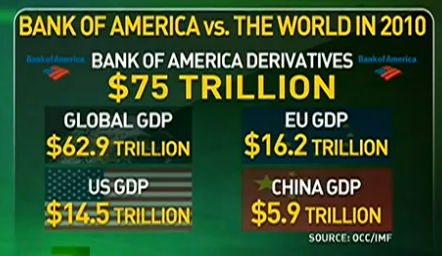 Edward Harrison of CreditWritedowns was all over the EU announcement today, and ended the day with a post about how the “voluntary” 50% writedown on Greek debt by banks skirts a default. Which means that investors who bought credit default swaps (CDS)—insurance where investors get paid in the event of a default—don’t get paid. Net result: bonds sell further pushing yields “much” higher, massive litigation, or both.

Harrison included an interview with Reggie Middleton of BoomBustBlog where he lays out the CDS issue clearly. At the end of the video, they also discuss BofA’s problems. Below is a slide of BofA’s derivatives vs. GDPs of various nations and world GDP. Staggering. If you want insight into what’s going in on Europe, this is a must-read/watch post.