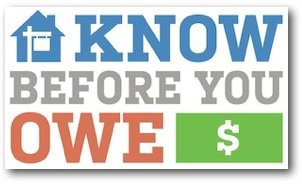 When you apply for a mortgage, you get Good Faith Estimate (GFE) and Truth In Lending (TIL) disclosures which show you fees and rates respectively. They’re both a joke because the GFE doesn’t show line item-specific fees and the TIL doesn’t show your actual Note rate.

In May the CFPB set out to fix this problem by asking the public and industry to vote on one new disclosure that replaces both the GFE and TIL. Today they launched two options of version four that consumer and lenders can vote on. These latest drafts are more complicated than previous versions, but still: please GO VOTE so consumers and bankers can communicate more clearly with each other in the near future. Let’s hope the CFPB will listen, though their follow-nodoby Twitter policy is also a joke.